Skies without planes: what it means for the environment

One Change: Con trails from aircraft can accumulate, creating clouds which trap energy 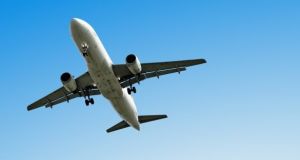 The atmosphere is enjoying a break in air travel pollution. Photograph: Getty Images

It’s a plane! The skies have been so clear and quiet over the past couple of months, it’s almost become a novelty to see one. The other day I found myself stopping to watch as one crossed above, cutting through the blue with a long fluffy contrail.

These criss-crossing white contrails have long been a feature of our skies – until now. The near cessation of air travel recently has brought us undisturbed and expansive views of the atmosphere – a rare and special opportunity, despite the circumstances. And, like the cities all around the world experiencing massive drops in air pollution due to lockdowns, you’d like to think of the atmosphere way up there enjoying a nice break from all the air traffic.

The problem with CO2, however, is that it can linger for hundreds to thousands of years when emitted so high up in the atmosphere. And that’s a big part of the issue with the airline industry, which is responsible for approximately 2-3 per cent of the total annual global CO2 emissions from human activities, according to the Intergovernmental Panel on Climate Change (IPCC).

On the ground, CO2 emissions from cars and trucks have the potential to be absorbed by oceans, trees and all the other carbon sinks of the world. But airliners, which cruise at about 30,000-35,000ft, create emissions that do not get a chance to mix or dissipate, and end up trapped in the atmosphere for years.

Contrails – or condensation trails – are produced by engine exhaust and composed primarily of water in the form of ice crystals. A conspiracy theory doing the rounds for some years now is about what’s dubbed “chemtrails”, claiming that contrails have chemicals or biological agents – a suggestion that has been roundly dismissed by the scientific community.

Vapour trails from aircraft often seem to be short-lived and usually fade after a while. The real issue is the high volume of air traffic. Instead of fading, contrails often spread and accumulate, creating large cirrus-like cloud formations (also known as contrail cirrus), making them effectively permanent.

So, are they bad for the environment? Yes, because these bands of clouds trap energy and contribute to the warming of the planet.

All of which is worth bearing in mind when considering how we travel when the world slowly returns to some form of movement again. And even though it may take the airline industry a while to recover from this elongated pause, the skies are unlikely to enjoy such a long holiday from human traffic for many years to come.