Up to 115,000 Irish people joined the Ashley Madison website and now face having their private fantasies made public 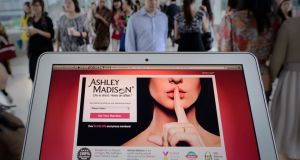 “Life is short. Have an affair.” The motto of the Ashley Madison website that allowed married members to share their secret sexual fantasies – and their credit card details – has been depth-charged by the Impact Team of hackers in what some call “an act of cyber-terrorism”. For the 40,000 unfaithful Irish members – a 2011 figure, so there are likely to be many more thousands now – this will be an act of the most intimate domestic terrorism. (The site has some 37 million users worldwide)

Families are going to be devastated, says psychological experts.

If the intensely private nuggets of data about sexual preferences and pornographic photos of millions, including many tens of thousands of Irish people, become widely accessible, Ashley Madison’s doomed PR fire-fighting will be nothing compared to the impact in thousands of Irish homes.

Life is long. Having an online extramarital affair can destroy everything. So why would anyone expose their credit card details and sexual fantasies to a website? “Part of the kink is to depart from what is expected and to be secretive. The frisson is transgressive,” he says.

The Ashley Madison website is like a swingers’ club, where cyber “keys” are used to connect married people who want to have sex with strangers. You could call it a posh brothel, where sexual barter rather than cash is used. The website – call it the Madam or Pimp – makes the money.

“The unconscious desire to act out personal fantasies outside marriage has always been dangerous. It has to be borne in mind, that to be a member of Ashley Madison doesn’t mean they have acted on it. It could be an extension of a masturbatory fantasy,” says Moore.

“People have always had affairs, but what’s new is that the internet is very unsafe. It has allowed us to explore areas that are shameful. In the shadow of the internet so much cruelty can happen.”

Imagine now, that you have used the site and are filled with shame. “That could be really destructive . . . it would be really hard to recover from that,” says Moore.

So why join Ashley Madison or its ilk in the first place? “Loneliness, seeking an emotional connection that is missing in the relationship, wanting to be listened to, to experiment, to vary your sexual experience,” says Teresa Bergin. “Often, those having an internet affair want to stay in their marriage/relationship but they want to free themselves from a sense of deadness.”

The consequences of such affairs? “Few things are more damaging to a relationship than having an affair. Even if it’s an emotional affair it’s still considered a betrayal, sometimes more so than a sexual partner.”

“It can trigger the end of the marriage. I have seen couples survive an affair [online or otherwise] with psychological counselling, but in most cases it’s the deathknell,” she says.

So imagine again, that you are the spouse or committed partner of someone who has betrayed you online through a site such as Ashley Madison and you have now discovered it. How do you feel? “Grief, loss, jealousy, anger . . . It is just as significant as if you had an affair with someone you met [offline]. Your partner has been investing time and everything else in that relationship and the secrecy is damaging. You will be wondering what is it about me that is unacceptable?” says Bergin.

Ashley Madison website users must be quivering over their laptops, dreading being found out and certainly losing – in quick time – that frisson of the transgressive. It’s real life happening now, should your partner or spouse find out. Expect, as Moore puts it, the “cataclysmic”.

Alison Curtis: My guilt at not going for a second pregnancy
6