‘What are the tingles in my head?’ The strange subculture of ASMR

People with autonomous sensory meridian response get tingles when they hear certain sounds. It has spawned an industry in unusual YouTube videos 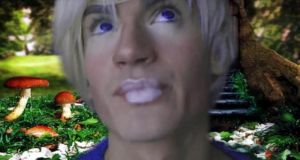 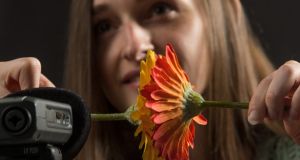 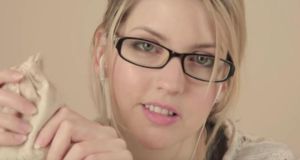 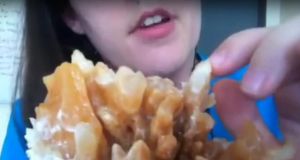 The man leans in, pupils bulging behind purple contact lenses. “Oh, hello there,” he says, so close you can see the pores on his nose. “I thought you were the paparazzi. They’re very interested in the fairy world.”

The speaker is Tony Bomboni, a prominent member of the autonomous sensory meridian response community. ASMR refers to the tingles certain people experience upon hearing soft voices or soothing noises. The purpose of this video – it’s called Faerie Role Play and is on YouTube, should you feel the urge to investigate – is to induce a shivery bliss in the viewer through whispers, gentle ululations and a disturbing impersonation of a man-elf who thinks he is Lady Gaga.

By the time I stumble upon Bomboni’s purple video I have been exploring this curious annex of YouTube for several hours. Already I have observed a young woman who is pretending to be a spa attendant rub cotton-wool across her computer screen and a man in a bird mask examine a Lego brick for half an hour.

Let me explain. Since childhood I have experienced ASMR as a powerful tingling, originating at the crown of my head and proceeding down the spine. Early encounters with the phenomenon remain especially vivid. I remember being six years old or so, watching my grandfather tap his pipe methodically on an arm rest. The woozy thunk-thunk-thunk caused spirals of almost-goosebumps to swirl just beneath my scalp, flowing to my shoulders. It was like being zapped by a Star Trek phaser and hugged at the same time.

My sensitivity continued into adulthood, again brought on by soothing noises. But nobody I ever mentioned this to had any idea what I was on about, so I dropped the topic. It was just one of those things.

Then the internet came along and with it a vibrant ASMR community. On YouTube you can sample hundreds of ASMR “role play” videos in which individuals affect evocative whispers and enact imaginary scenarios – a visit to the hairdresser or beautician, say – believed to trigger tingles among the ASMR-sensitive.

In theory I was entirely up for this. Experiencing ASMR is not pleasurable as such – at least not for me (it differs from person to person, apparently). However, it is an effective means of tuning out, rebooting your brain, relieving stress. And frankly I spend half my day watching rubbish on YouTube anyway. Why not put that time to good use? Alas, reality did not initially tally with my wishful thinking. Even as someone with a lifelong history of ASMR, I found the videos strange. Why would people – overwhelmingly female, for some reason – pretend to be hairdressers, travel agents or your best friend doing your nails before a night out? Who were they? What was in it for them?

Keen to deepen my knowledge of ASMR and also to resolve my struggle to take the community seriously, I contacted several Ireland-based YouTube “whisperers”. Generally they preferred to communicate via email and were not in every case keen to have their real names used. Still, once a little trust was built they were amiable and eager to give their views.

“I remember when I was in school I would experience ASMR when the teacher would give me personal attention if I didn’t understand something,” says Andrew Buckley, whose YouTube channel, AndrewASMR, has received tens of thousands of hits.

“She would whisper explanations to me so as not to disturb the other students. I would experience the same tingles in my head but also on my arms and down my back and on my legs as well. It’s important to note that these tingles feel different to goosebumps.”

Nobody knows what causes ASMR. Indeed, there is a body of opinion that the sensation is an internet fiction and that the hundreds of thousands claiming to experience it are partaking in a collective delusion. Among scientists open to the possibility of ASMR being real, one popular theory is that it is related to the warmth and security we experience as infants, when the parent-child bond is at its strongest.

Andrew Buckley had not heard of the acronym before stumbling upon the ASMR community online. “I remember googling ‘What are the tingles in my head?’ The Wikipedia page popped up with a detailed explanation and links to videos on YouTube . . . I was surprised to find that I wasn’t the only person to experience ASMR.”

Some are introduced to ASMR while looking for relief from insomnia. “Around five years ago I was having trouble sleeping at night, so I went on to YouTube and started watching and falling asleep to sleep hypnosis videos,” says Kevin, a Northern Irish ASMR enthusiast who posts as TheWhisperCorner. “I did this for a few months and then, when clicking on the related videos, I found a channel called Whisper Crystal, which featured a woman soft speaking or whispering and I found that was an even better way to fall asleep.

He was soon making his own ASMR videos. Still, Kevin admits he was initially sensitive to how odd ASMR role play must seem to outsiders. Here he touches on my conundrum. I know ASMR is real and understand that those posting videos have the entirely laudable aim of reaching out to their peers. Yet how is anyone with a smidgen of self-consciousness to get past the fact that, should they choose to venture down this rabbit hole, they are probably going to end up watching Tony Bomboni pretend to be a whispering Smurf? Not all of us can bring ourselves to sit through 25 minutes of a grown man impersonating a fairy. Maybe that’s our loss.

“I can completely understand how stumbling upon an ASMR video can be a bit strange at first,” says Grace, a Texan living in Ireland who posts to YouTube as Accidentally Graceful. “Videos with titles including ‘role play’, ‘20 minutes of tapping’ can initially seem a bit odd. In the ASMR world, role-play videos are meant to be immersive, almost virtual reality-like simulations of a relaxing experience such as a haircut or massage.”

Kevin: “Initially I kept my channel and watching ASMR videos quiet from my friends and family altogether. It was only when I made a few ‘comedy ASMR’ videos that I showed my videos to a couple of close friends. They laughed at me making an idiot out of myself but they never experienced any ASMR and were bemused when I explained what they were for.

“Last year one of my colleagues found my channel and showed videos to everyone and it only got back to me a couple of weeks later when a member of management caught me completely off guard by saying, ‘Kevin, you know everyone thinks the ASMR videos you make means you’re completely insane.’

Conor Pope: At 19km/h, I have never felt less like an athlete
5