Our Wedding Story: ‘Of course I said yes and we jumped in the pool to join the ducks for a swim' 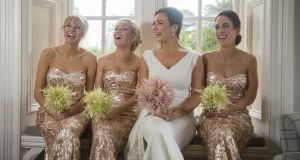 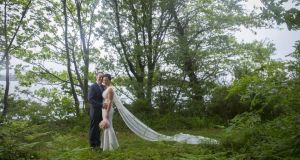 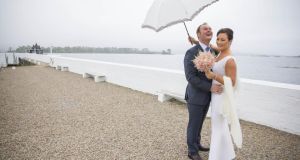 Ann Power and Gary Cowman Ann, director at Powerhouse PR, and Gary, a carpentry and joinery instructor with Wexford Education and Training Board, are both from Waterford and met on December 20th, 2003 at the annual Tramore Sea & Cliff Rescue Christmas party.

They were engaged on January 3rd, 2014 in Capetown, at an infinity pool overlooking Hout Bay. “We were the only two people there and suddenly two ducks flew in and landed in the pool,” remembers Ann. “Gary took it as a sign, got down on one knee and proposed – I was completely overwhelmed. Of course I said yes and we jumped in the pool to join the ducks for a swim.”

Gary, a keen surfer, was working in Kerry when the couple met, so they agreed to have their wedding there. On May 30th, 2015, they were married by Bridget Carlin in a Humanist ceremony on the pier at Dromquinna Manor in Kenmare.

“Certainly it was mine – and I think Gary’s – favourite part of the day,” said the bride. “We tried to make the ceremony inclusive, we chose some of our favourite poetry and asked friends to read these. Both mums helped to light the candles. Some of our favourite songs were played by a brilliant jazz trio (the Phill Collins Trio), and our rings were passed around the room – in a beautiful wooden love-heart shaped box that Gary made – for a ring-warming ceremony for everyone to hold and instil the rings with their love and good intentions.”

Ann’s dress was made by Charlotte and Jane in Kinsale; her silk tulle cape veil (inspired by Lord of the Rings) came from Jill Wilde at Wilde by Design in Dublin. Bonzie Designs in Waterford made her head-piece.

As the newlyweds left the boathouse, guests showered them with confetti from cones made from a personalised front-page of that day’s edition of The Irish Times (with their wedding making the lead story).

The rain came just after guests sat down for dinner in the Manor at tables named after lighthouses visited by the couple.

Brothers of the bride and groom, Niall Power and Matt Cowman, made speeches after dinner, before Tramore-based band, Brand New Cadillac, got the party underway. A few months before the wedding, Gary had sent them a track from artist Donavon Frankenreiter called Shine, which they played for the couple’s first dance.

The next day, guests joined the couple aboard the Star of Kenmare for a boat trip from Kenmare Bay Pier to Dromquinna Pier where they docked for dinner, more dancing – with musician Nick Ryan – and ended the night with beers around a fire-pit.

With lots of family living overseas, everyone spent the week in Kenmare. Gary and Ann will fly to Bali later in the summer for their honeymoon. Photographs: Patrick Browne, brownesphotography.ie