Vivian Cassells: One of Ireland’s most well-known careers guidance counsellors 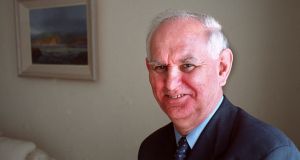 Vivian Cassells, who has died aged 83, was a highly respected career guidance counsellor, teacher and journalist. He contributed for many years to this paper’s Education and Living supplement and was instrumental in setting up The Irish Times Higher Options event, which has become an annual fixture in the Irish education calendar.

His long-time friend and former principal at Oatlands College, Michael Madigan, said he “gave a lifetime of devoted service to education and particularly to guidance counselling in which he was involved from its very inception in Ireland”.

He was born in Girly, Athboy, Co Meath and attended the local primary school before receiving his secondary education at Marist College, Athlone. He became a Marist Brother and having graduated from UCD, taught in Marian College, Ballsbridge, Moyle Park College, Clondalkin, where he was principal, and Oatlands College, Stillorgan.

It was in Marian College that he first became involved in guidance counselling. This was the 1960s and the concept was relatively new to most people involved in the day-to-day management of schools but, in Madigan’s words, he “saw the need for vocational guidance in the broad sense, ie not only providing students with career and vocational advice but also helping them to make the most of their opportunities and to develop as persons”.

Gradually the Department of Education came to see the merits of the Marian College model and by 1971, some 120 teachers had received department-sponsored training.

They formed the Association of Guidance Teachers, which became the Institute of Guidance Counsellors in 1976, with Cassells as their national secretary. His frequent articles in this paper gave guidance a high media profile.

In 1976, he was a recipient of one of the People of the Year awards. He was also named Meath Man of the Year and elected to the governing body of UCD in the same year.

Cassells also wrote a number of books, including The Concise Guide to Careers and The Careers’ Resource Book.

He left the Marists and in 1985 became guidance counsellor in Oatlands College. The following year he married Anne Tuffy, a long-time family friend and guidance counsellor in Loreto Dalkey. He continued to play a prominent role in the Institute of Guidance Counsellors and was director of the National Centre for Guidance in Education and consultant to the National Council for Curriculum and Assessment.

Brian Mooney, who succeeded Vivian Cassells in Oatlands and who now covers career guidance for The Irish Times, described him as “larger than life” and referred to his ready availability to students and their parents and to how much he learned from him as a mentor and friend.

He is remembered for his courtesy, gentleness and unfailing good humour.

Following his retirement in 1998, he continued to play an active role in Irish education in various capacities.

One of his favourite pastimes was attending the National Concert Hall with his wife Anne. They also loved the theatre, cinema and travelling widely, especially to France.

He is survived by Anne, brothers Ambrose and Eamonn and sisters Sheila and Joan.