Virtuoso and champion of traditional harp 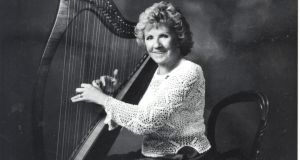 Gráinne Yeats: In the course of her career, she performed in concerts and recitals in Ireland, the UK, North America and many of Europe’s capitals as well as Russia, India and Japan. Photograph: Matt Kavanagh

Gráinne Yeats was a harpist, singer and historian of the Irish harp, and is credited with the revival of the traditional wire-strung harp. She also built a profile for the Irish harp which broadened its appeal beyond the cabaret circuit, thereby re-establishing it in its own right and introducing harp music to a wider audience.

In the course of her career, she performed in concerts and recitals in Ireland, the UK, North America and many of Europe’s capitals as well as Russia, India and Japan.

She was an accomplished soprano, and Charles Acton in this newspaper described an early song recital: “Here she sang unaccompanied the great music of An Clár Bog Déil , the gentle rowing song Óró mo Bháidín and the delightful Cucuin [a Chuaicin] .” Impressed by the “beauty” of the performance, Acton praised her “intensely true, pure voice, trained with art”.

In 1968 Charlotte Brooks wrote of a concert in Sligo: “Gráinne Yeats’s voice is as pure as ever, her diction and intonation as impeccable and her artistry as loving.”

Born in Dublin in 1925, she was the youngest of three children of PS O’Hegarty, a former member of the IRB supreme council, and his wife Wilhelmina Rebecca Smyth, a Cumann na mBan veteran. Her father became secretary of the Department of Post and Telegraphs on the foundation of the State.

Bilingual upbringing
The family was bilingual: Irish was her first language and she grew up as Gráinne Ní Éigeartaigh. She was educated at Scoil Bhríde and Alexandra College and learnt her first traditional Irish song on holiday in the Kerry Gaeltacht. As a young girl she learnt to play the piano.

After graduating with a degree in history from Trinity College Dublin, she continued to develop her interest in music, studying piano, voice and harp at the Royal Irish Academy of Music in Dublin.

Her interest in the harp stemmed from hearing the instrument played by actress Joan O’Hara, sister of harper Mary. She learnt basic harp technique from Sheila Larchet Cuthbert and Mercedes Bolger, and later performed with Bolger all over the country.

However, she cut her teeth as a singer. For example, in 1958 she sang items by Handel, Bach and Haydn at an organ recital in St Luke’s Church in the Coombe. The following year she was the soloist in a performance of Bach’s St John Passion in the Methodist Centenary Church.

Irish repertoire
Her repertoire included over 300 songs in Irish, and she always sought to include some of them in her performances. In addition to performing as a soloist she also was associated with the Dowland Consort, directed by Brian Boydell.

She took up teaching at the Royal Irish Academy of Music when Mercedes Bolger left to have a baby. Later, with Bolger, she helped set up harp schools around the country. Their teaching programme raised standards considerably.

She played a gut-strung instrument for many years, and acquired a wire-strung harp only after a long search. An aeronautics designer expressed interest in making one, but never produced anything. A furniture maker likewise let her down.

Eventually she made contact with American harp maker Jay Witcher, who made her a replica of a 17th-century style Sirr harp. He revived the making of wire-strung harps, while she revived the playing of them.

She conducted extensive research on the Irish harper-composers and their repertoire, and on the history of the Irish harp. Her work contributed much to Irish musicology, most notably her entry on Turlough Carolan in the New Grove Dictionary of Music and Musicians (1980) and her book The Harp of Ireland (1992).

She also was a contributor to Ceol and other publications, and with Mercedes Bolger edited the series of manuals Sounding Harps .

Her album of traditional Irish songs was released by the New York-based Spoken Arts label in 1963. Gael Linn released the album A Rogha Féin in 1982. Her double CD The Belfast Harp Festival , also from Gael Linn, coincided with the bicentenary of the 1792 festival and includes 40 of the traditional tunes played on the occasion, as notated by Edward Bunting. This led to the reintroduction of many airs into the repertoire of contemporary harpers.

Harp festival
In 1966 she received the Harriet Cohen international music award. She was closely involved with the foundation of Cairde na Cruite and launch of An Chúirt Chruitireachta, the festival for Irish harp.

She was married to the former senator Michael Yeats. He, and their daughter Síle, predeceased her. She is survived by her daughters Siobhán and Caitríona and son Pádraig.