Uncaged: the fashion sense of a fighter 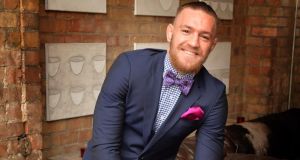 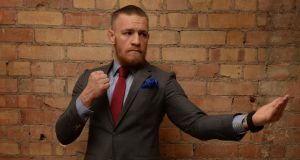 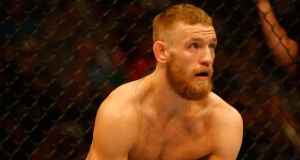 He was born with his fists clenched “ready for action”, says his mother Margaret. Now 26, Conor McGregor, from Lucan, Co Dublin, is the first Irishman to join the top hitters of the Ultimate Fighting Championship, the largest promoter of mixed martial arts in the world. Two years ago, he was collecting social welfare, now he’s driving Range Rovers and flying back and forth across the Atlantic pursuing a successful fighting career.

On Thursday, McGregor is the subject of a documentary The Notorious directed by Patrick Timmons Ward on RTÉ2 which reveals not only his outstanding sporting achievements but also his showmanship and style. “I like to whoop ass and look good,” he told a US press conference with typical bravado.

We meet at his gym on Dublin’s Long Mile Road where he arrives sharply turned out in a check shirt and jeans accompanied by Dee Devlin, his long-standing partner and soulmate. “I was always interested in fashion”, he says launching into the subject with enthusiasm, “but I also took note of the way [models] held themselves, their posture and the way they walked. When I started earning money, I wanted to buy new clothes.” An athlete in peak physical condition, he’s wise to the value of image and appearance. It gets him noticed.

Such interest in self-presentation is not mere affectation. “You need to be able to create interest in the fight and you need to be a showman if you want to reach the high level and make money. Muhammed Ali was one of the first to do it and entertainment plays a big factor. I knew the way the media portrayed the sport [as in hyped videos] and that I was going to be the guy to change that. I knew how to look the part, walk the walk and talk the talk. Who doesn’t like to look and feel good?”

He always goes the extra mile. “Before I used to watch animal documentaries and fight clips to learn new techniques. Now the thing is male fashion stuff,” he says with a grin, adding that he’s either in the gym or out shopping with Dee. He’s full of fun and easy banter, but despite the bonhomie and impish grins, there’s seriousness in those dark eyes. Success in a sport that involves a hardcore combination of grappling and striking techniques and endless hours of effort has been hard-earned and he trains daily often for nine hours. “Workouts are better for my mind than my body”, he says, shrugging.

He describes his style as laid-back, buttoned-up and with more spending power, more sophisticated. “Before I used to wear tracksuits to the gym and I used to love buying a new pair with new socks and runners. I would put them on straightaway and walk out of the shop feeling like a million. Now I dress like a champion.”

His first suit was from Louis Copeland which he wore for an appearance on The Late Late Show and he cuts an impressive, dandyish figure when decked out in waistcoat, pocket watch, bowtie and shades.

Picky
“I am picky about tailoring [and] sleeves . . . the waist must be tight and pants can’t be straight down square – they need to curve in and hug the ankle and show a little bit over the shoe. Fit is everything,” he says.

The sport isn’t associated with such style, but he reckons that’s changing. “A lot of them in mixed martial arts don’t care about how they look, but since I have come on the scene, I think they are dressing better. We all stay in the same hotel and some look like homeless people and I am around them in suspenders and dicky bows! I am aware that how you look is part of the business. If guys are happy being mid-tier it shows in the way they dress.”

He admits to being fussy about cleanliness, would love to wear new clothes every day and says he’s “obsessive” about socks, preferring colourful affairs to the white ones he used to wear.

He gets his hair cut at Brown Sugar, in Dublin, and grew facial hair because straight razors made his skin raw. The tattoos were done in LA – “I suppose boredom was the factor, but I like tattoos.”

Still recovering from a serious ligament injury, he’s raring to fight again, “because I want to compete. It’s the only thing. It’s a high-level, intense combat sport. It’s an art. I am on my own path and I am the first in Ireland to make a success of it,” he says.

Meanwhile, he is thinking about a tweed suit, but also about future commercial promotional opportunities. “Fighting is what I do, but it’s not the only thing I can do . . .”

His next moves may be ones to watch.