The Yes Woman: I’m taking a stand against my own laziness

For health reasons, we should probably all stand at our desks – but it’s not easy 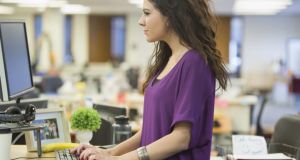 People who stand at their desks burn 50 calories more per hour than their seated counterparts. Photograph: Getty Images

Sitting down a lot is bad for you. Largely, of course, because it necessitates a lack of movement. According to the British Psychological Society, the average worker spends five hours and 41 minutes sitting at his or her desk daily. Apparently, going to the gym after work isn’t really the answer; the damage caused by being sedentary for extended periods isn’t counteracted by short bursts of intense exercise. So rather than sitting down, we should be standing up while we work at our desks.

People who stand at their desks burn, on average, 50 calories more per hour than their seated counterparts, which helps to counteract the slow increase in weight that can occur over years in a sedentary job. The obesity association is nothing compared with the fact that people who sit for long periods during the day are at much higher risk of developing diabetes and heart disease.

But enough scaremongering. I don’t want to stand up all day. Like a lot of people, I already go to the gym (with a great deal of reluctance and internal conflict). In fact, my day is filled with things that I don’t want to do:

Listening to a friend complain about the absolute dud of a boyfriend she should have left years ago, and refraining from saying: “He’s an unfaithful, chauvinistic bum. Get rid of him.”

Opening and resenting water bills, because we already pay for water.

Tolerating fluorescent lighting and going to the pharmacy and ignoring the sex music of the neighbours downstairs. (They signal coitus to the whole building by playing very loud, very bad, music.)

All of these moments in the day impinge on my sense of human freedom. Why add to them by standing up all day as I work, as though my feet haven’t enough to be doing already?

But then I remember: that’s a stupid attitude. It’s indolent, defeatist and pathetic. So I take revenge on the water bill by placing it under a bunch of over-ripe, moribund bananas, and start to research standing at your desk. It turns out that there are plenty of companies that specialise in what your granny might have called “high falutin’ desk adaptation devices” that allow you to customise your desk to your height. Luckily for me, I’m almost injuriously short, so the kitchen worktop suffices.

Writing this column for almost a year now has forced me to recognise some things about myself that I’d rather not. I am a lazy person, at least physically. Having spent years in the rather metaphysical world of philosophy, I developed the resentful attitude that my body is something I’m tied to, and often little more than an irritation.

Day one sees me set up my workspace by the kettle, since I write from home. Within an hour, I can already feel that this standing lark is better for your back than sitting. Unless you’re one of those people with an ergonomic, space-age office chair that looks set to launch at any moment, odds are that you slump forward throughout the day, curving your spine into a rather unhealthy C-shape. You’ll always contemplate how detrimental that is when you finally stretch, and feel something pop in your back. The problem is that my eyes keep wandering to the kettle, and by 12pm, I’ve already had four cups of tea. So I move over a little, only to spy the water bill leering at me from under the over-ripe bananas.

The standing makes me nervous, as though I’m waiting for something, and the natural urge to redistribute my weight has me lifting one foot, and then the other, like a tired horse. I settle eventually for a sort of strongman pose, feet flat on the floor at shoulder width. I feel rather stupid.

By lunchtime, my feet are tired and I’ve already eaten my lunch because I’m next to the fridge. There’s certainly much more movement – pacing, stretching, making a dangerous number of cups of tea – but my concentration is not there.

If I worked in an office, I would stick to sitting, but try to get up and move more. Use the stairs. Just don’t let stagnation set in. I sit down.