The Women’s Podcast talks women in politics in first episode

The reality of being a woman in politics, Louise O’Neill discusses her new book about rape culture and our question of the week 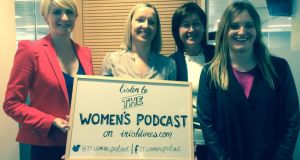 “I can see why women are nervous, and it’s difficult to break into a club which for so long has excluded women. But the only way we’re going to tackle those issues and change the culture is if we get more women involved…and if, as women, we work together,” says Independent Senator Averil Power in this week’s episode of The Women’s Podcast.

Renua Ireland Party leader Lucinda Creighton, who over the weekend announced the party is open to a referendum on abortion, talks “cultural problems” in the Oireachtas, why women don’t vote for more female politicians and whether she would encourage her own daughter to run for office.

We also visit Women for Election’s three-day campaign school, a political “boot camp” for women interested in running in the next General Election. According to the group, at the current rate of change, it will take 250 years to achieve gender parity in Irish politics.

The Women's Podcast on Social

Later in the episode, Tanya Sweeney talks to Louise O’Neill about her new young adult novel Asking For It. Inspired by horrific stories of “rape culture” in the news at the time of writing, including the Steubenville and Maryville cases in the United States, Louise explores what happens when a similar crime happens in small town Ireland.

Our question of the week addresses the abortion stories published over the last few days by Roisin Ingle and Tara Flynn.

Do you think Irish women putting their names to their stories is necessary for a more honest conversation about abortion in Ireland?

Send us your answers via Facebook and Twitter at IT Women’s Podcast or email us at thewomenspodcast@irishtimes.com.

The Women’s Podcast is a weekly podcast presented by Kathy Sheridan, produced by Roisin Ingle and researched by Erin McGuire.