The Women’s Podcast question: What is your favourite Irish play by a woman? 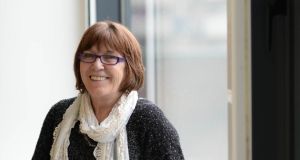 Marie Jones, writer of ‘Stones in his Pocket’ which premiered at the Gaiety Theatre in 2014. Photograph: Dara Mac Dónaill/The Irish Times

Each week on the podcast, the presenter Irish Times journalist Kathy Sheridan asks listeners a question. This week’s question is prompted by the recent furore over the 2016 programme for The Abbey Theatre which features 10 plays only one of which was written by a woman.

On Monday 9th November the the board of the theatre released a statement in response to the ongoing #wakingthefeminists conversation: “The Board and Director of the Abbey Theatre acknowledge that the 2016 programme does not represent gender equality,” it said. The theatre has also agreed to host a meeting at the Abbey on Thursday 12th of November to discuss the issue with the wider theatre community.

In the meantime, we want to know: What is your favourite Irish play written by a woman and why?

Last week’s podcast question marked the 25th anniversary of the election of Ireland’s first female president Mary Robinson. Kathy wanted to know: Who will be our next woman president?

Apart from a couple of mentions of Emily Logan, there was only one woman’s name on people’s lips and that was RTÉ broadcaster Miriam O’Callaghan.

Here are a selection of the comments in support of O’Callaghan:

Anne-Marie Connolly: “Miriam O’Callaghan is a long-time and loyal supporter of Peter McVerry Trust, and helps us out regularly with events like our Gala Ball and other publicity work. Everyone loves to see her at our charity events and she has become a staple at many of them. She has also spent time in our homeless services and knows the work we do first-hand ... I believe she would make a truly fitting next female President.

Marion Cody also nominated O’Callaghan: “She has incredible presence, intelligence and is liked by so many people. This intelligent warmth would work wonders in building our profile abroad. On a serious note, she has a legal background and has shown her ability to challenge even the most powerful people when a challenge is required.”

Patrick O Reilly, Artist/Sculptor said “I wish to add my support to Miriam O Callaghan and hope that she decides to become a presidential candidate. She is extremely bright and incredibly capable. Her ability to multitask and manage such a busy diary is noteworthy. It is her true passion for people and worthy charitable causes that makes her stand out as a truly unique and compassionate person. I believe Miriam would make an excellent president for Ireland.”

In the podcast Kathy mentioned European Ombudsman Emily O’Reilly as a potential candidate and we are happy to clarify that O’Reilly will not stand according to a statement from her office:

“She will not be running for the Irish presidency, even if such a position became available.”

The Women’s Podcast is uploaded every Monday on irishtimes.com. Individual episodes of the podcast are available on Soundcloud, iTunes and Stitcher.