Weekend read: The Dutch industrialist was abducted in October 1975 by Eddie Gallagher and Marion Coyle, two republicans who held him for 36 days 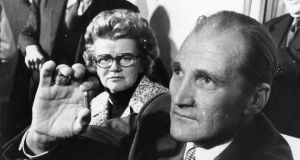 Freed: Tiede Herrema, accompanied by his wife, Elisabeth, in November 1975, shows a bullet that one of his kidnappers gave him. Photograph: Paddy Whelan

On October 3rd, 1975, Dr Tiede Herrema was driving from his home in Castletroy, Co Limerick, to an early-morning meeting at the Ferenka steel plant at Annacotty, when he was abducted by two republicans, Marion Coyle and Eddie Gallagher.

Herrema, invariably referred to thereafter as “the Dutch industrialist”, had been dispatched by the parent company in his native Netherlands to troubleshoot the strike-ridden factory, which employed 1,200 at a time when the Irish economy was reeling from the oil crisis and six years of Northern Ireland troubles.

The kidnappers, banking that Liam Cosgrave’s government would quietly cave in, so as not to scare off other foreign investors, threatened to “execute” Herrema in 48 hours unless it released the republican prisoners Rose Dugdale (who had given birth to Gallagher’s son in Limerick Prison), Kevin Mallon (a friend of Coyle’s) and James Hyland.

It was the start of a 36-day ordeal for Herrema and his family, sparking the biggest manhunt in the State’s history.

Two weeks later a tape of Herrema’s voice was released, accompanied by demands for a £2 million ransom and a flight to the Middle East. After 18 days the kidnappers were traced to a terraced house in Monasterevin, Co Kildare.

When gardaí smashed the front door down the kidnappers retreated to the house’s box room, where they holed up with the hostage in a stand-off that lasted 18 days, with the world’s media camped outside.

After several days without food or water they began to accept supplies – as well as underpants and a chamber pot – hoisted up in a shopping basket. On day 18 Gallagher claimed to be getting severe headaches and neck cramps, which Herrema took as a sign that he was seeking a way out. Soon afterwards the kidnappers threw their guns out of a window and surrendered.

Coyle was sentenced to 15 years, of which she served nine. Gallagher served 14 years of his 20-year sentence. In 1978 Gallagher and Dugdale became the first convicted prisoners in the State’s history to be married behind bars.