Ten years after the death of English writer Pete McCarthy, tourists continue to pour in to the Castletownbere pub made famous by his best-selling book and its vivid depiction of Irish life 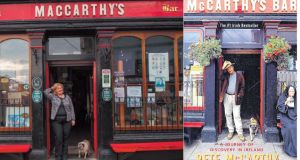 ‘I feel rather pathetic telling the woman serving me that I’ve come in because my name is McCarthy,” writes the late Pete McCarthy in the best-selling book McCarthy’s Bar, which subsequently sold about one million copies, and is still in print. “Presumably I’m not the first lonely heritage-obsessed saddo to turn up from overseas claiming to be part of the diaspora and hoping to be made a fuss of.”

McCarthy died a decade ago, which has prompted my own visit to MacCarthy’s bar, the now iconic pub in Castletownbere, Co Cork, which appears on the book’s cover and is the place where McCarthy admitted feeling “rather pathetic”. McCarthy, born in England to Irish parents, was travelling around Ireland, trying to understand the country that was simultaneously so familiar and so unfamiliar to him, and writing his first book, a sharply observed, insightful, extremely funny narrative of Ireland and its people. The book was tied together by McCarthy making a point of never passing a bar that had his name on it. Hence his arrival into Adrienne MacCarthy’s premises on the Beara peninsula in April 1999.

Not only did his (almost) namesake not allow him to pay for his pint, she also told him it was her birthday. “There’s a bit of a party later. Maybe you’d like to come?” she asked him.

The party started in the afternoon, involved lots of pre-dinner celebrations in the evening, and then moved on to dinner in Adrienne’s sister Niki’s restaurant, then more drinks at another bar, and then a lock-in for a private party back at MacCarthy’s, with an ad-hoc sing-song and dancing. It ended just before dawn. The visitor was included in all of it and was not permitted to part with any money. It was the perfect, spontaneous night of classic Irish hospitality that tourists and locals alike dream about happening, but that so rarely actually does.

“We had no idea Pete was writing a book,” says Adrienne. “We assumed he was a tourist. It’s not something you really ask someone: what are you doing here? He was very quiet and unobtrusive; you would hardly know he was there. He was obviously very observant.”

He had been the only man that evening among 12 women – “assorted ages: fortysomething to eightysomething,” as he wrote in his book. “One of them raised a glass. ‘Well Peter, blessed art thou among women’, which really is an excellent joke if you know your Hail Mary.”

“That was me,” says Margaret Cronin, who is working behind the bar as I’m talking to Adrienne. They both agree, as does Niki MacCarthy, that Pete wrote exactly what happened that evening, which is quite a remarkable act of recall, given that nobody saw him taking any notes. The first they knew of the book was when Adrienne received a phone call a few months after his visit. “He said he’d written a bit of a book about the popularity of Irish bars worldwide, and he said, ‘Do you realise there’s a factory in Connemara that sells Irish bars?’ And then he said, ‘Would it be all right if we put your bar on the cover?’ ”

She agreed, and also agreed that the designer could photoshop the name over the bar, to turn it from MacCarthy’s to McCarthy’s. “I didn’t think it was a book that anyone was going to buy.” Pete turned up a week later with a photographer and a nun’s costume. He wanted Adrienne to put it on, and to sit on one of the benches outside drinking a pint of Guinness. She refused: “I was too mortified.”

Helen O’Shea, a barmaid working there that day, did it instead. Adrienne’s pug, Bailey, was not meant to be in the picture, but was caught in the shot as he escaped out the door. Not long after that, a parcel arrived in the post with the book. It devoted an entire chapter to the “All-Night Hooley in MacCarthy’s Bar”.

“I was thrilled to see Bailey on the cover, and then I opened it up, and I nearly died when I saw there was a whole chapter about us and the all-night party,” says Adrienne. “What would the local sergeant think? It was a private party, but still, I was very worried about that.”

Adrienne’s family watched in amazement as the book climbed up the best- seller list and stayed there for weeks. Even though it’s not stated anywhere that the cover depicts Adrienne’s bar, readers soon found it. They probably took a magnifying glass to the cover and saw, beneath the sticker in the window advertising Call Cards on sale within (remember those?), a sticker that read “Beara” and another that read “Castletownbere”.

“People come in with the book, and the first thing they say is, ‘Is this definitely the bar?’ Fourteen years after McCarthy’s Bar was published, they are still coming. The act of generosity of welcoming the stranger who arrived unexpectedly on Adrienne’s birthday has repaid them many times over in the trade it has since generated.

“We say every year, ‘How can it still be so popular when there is no advertising?’ Some days when it’s so busy, we say, ‘Pete, what have you done?’ You’d think after 14 years, the interest would have diminished a bit. It’s the best promotion you could ever have.”

‘A bar with groceries’

In 1999, when Pete McCarthy visited, he described the bar thus: “The front half is a grocer’s shop with seats for drinkers; the back half, a bar with groceries.” It still is. The “fridge full of dairy products” still contains milk, eggs, Galtee cheese and butter, but it now also has bottles of white wine and Prosecco. The grocery shelves are still “well-stocked” with tinned beans, spam, ketchup and chickpeas. The shelf that he “cracked his head off” when he stood up is still there, and still causing headaches. MacCarthy’s is a beautiful, atmospheric and effortlessly authentic bar. One thing that is there now that wasn’t when Pete McCarthy first visited is a large signed poster of his book, hanging up on a wall in the middle of the bar.

After the book was published, McCarthy returned several times to Castletownbere, bringing various family members with him. He had written of that all-night hooley: “Saying goodbye to my newfound family and friends, I realised with a shock that I now knew more about some of them than about people at home I’d known for 20 years.”

He had made a real and lasting connection with the place and the people. “He came back a few times, and felt part of our family,” says Adrienne. “And he was really glad that, when the book got really big, we didn’t have neon signs or anything advertising the place. We said, ‘The bar was here before you, and it’ll be here after you’.”

And indeed, only four years after McCarthy’s Bar was first published, and two after his second book, The Road to McCarthy, Pete McCarthy died of cancer, aged only 52. At the time of his death, he was working on what could have been his most interesting and provocative book of all, one about Northern Ireland.

“My sister Niki and I went to Lewes to the funeral,” says Adrienne. “We took a bottle of champagne to the end of Brighton Pier and opened it, and had a glass or two in his memory. We were so delighted to have had his friendship.”

November 13th, the date of my arrival in MacCarthy’s Bar, is also coincidental, but for a different reason: it turns out to be the 10th anniversary of Pete McCarthy’s memorial service in Brighton, which we discover when Adrienne brings out a copy of the memorial booklet that his family sent her.

Among the eulogies and tributes is one from his sister Patricia, which concludes by quoting some lines from McCarthy’s Bar:

“If life is a book, then read it while you can. Don’t save up any pages for later, because there might not be one.”