Stop millennial bashing, it's not our fault

Millennials aren’t the first generation to face hardship, but they are the first that will be comparatively poorer than their parents 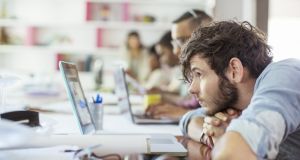 Young people born in the 1980s and 1990s have been the subject of several critical think-pieces in Irish and international media in recent weeks. They have been lambasted for their apparent sense of entitlement, laziness, self-centredness, obsession with social media, reliance on their parents, and any number of other apparent failings. An article in the Sunday Independent recently called for the “moaning millennials” to “pipe down”, arguing that it is those from Generation X who have the worse deal.

Fionn Rogan, a recent TCD graduate in his early 20s, provoked backlash online recently following an Irish Times piece about the “infantilisation” of millennials. But the image portrayed of Generation Y in such articles is more than an unfair generalisation - it’s a worrying stereotype that has the potential to do more harm than good.

The old adage not to judge a book by its cover might benefit those in their 20’s and 30’s with a more contemporary take: “Don’t judge a millennial by their Facebook page”. However, it seems to have been forgotten by critics of the so-called “Generation Snowflake”.

Put simply, some young people are selfish and lazy. Many aren’t. Replace the word “millennial” with “60 year old” in most pieces discussing their various faults, and you can see how ridiculous it is to generalise an entire age group.

Young people, like everyone else, are a diverse set, and they can’t be summed up in a few catch-all adjectives. But like the rest of the country, they are facing extremely difficult financial and economic circumstances.

Millennials aren’t the first generation to face hardship, but they are the first that will be comparatively poorer than their parents. A study of young people in seven major Western economies by The Guardian, which included the UK, France and Germany, showed that their income lagged far behind the national averages, writing “It is likely to be the first time in industrialised history, save for periods of war or natural disaster, that the incomes of young adults have fallen so far when compared with the rest of society.”

Closer to home, an ESRI study showed that under 30s in Ireland were almost twice as likely as older adults to suffer with multiple problems in quality of life, including financial strain, crowded accommodation and deprivation. This isn’t a problem of their own making.

The generalisation that we hear about is an over-simplification of an economic climate which is extremely unforgiving to those starting out. Contrary to the stereotype, most millennials aren’t living at home into their 30s as a lifestyle choice or because of their mothers’ cooking. They’re living at home because renting is too expensive if they want to save for a deposit on a house, and because JobBridge and unpaid work won’t buy their groceries. Unemployment figures are going down, but still show that 16% of under-24s are unemployed, compared to 7.8% of the general population. The imagined ideal of a generation of young people lying around on their parents’ sofas, playing the Xbox and choosing not to work is not one that I have experienced. What I have seen is a generation that have had to work hard to prepare themselves for jobs that aren’t always there.

Students are often an easy target for vitriol because they are the most visible cohort of under 30s. The fact that half of students work part-time alongside college courses in order to fund their studies is often ignored, as are the countless ways in which students contribute to society in the form of volunteer work. Rogan somewhat unfairly and patronisingly writes that working as a student “will make you a better person”, disregarding that even unpaid work can be difficult to come by. Working is not a game or a hobby that one can simply take up when it suits them, and particularly not in an environment where jobs are scarce for those with less experience. Those who can’t get jobs need to be supported rather than judged.

The ESRI figures showed another indicator of disparity in quality of life: social class. Working class people were 2.6 times more likely to report multiple problems with quality of life than those in the professional class, an even wider gap than that of age. One thing that links many of the commentators on Generation Y, supportive and otherwise, is that they are generally middle class themselves. Perhaps the “snowflakes” they see are a symptom of the company they keep, rather than of all under 30s. As a result, early school-leavers and those who do not continue to third level are often rendered invisible in the millennial discussion, despite that they are often among the worst-off.

Generation Y is graduating into a very different working world to that of 10 years ago. Unpaid internships, zero hour contracts and low-paying entry level jobs are hard-fought for. As a result, most have little hope of owning their own property until they’re at least in their 30s or 40s, if at all. Of course this generation’s timeline has changed in response to this additional pressure - wouldn’t it be more of a surprise if it didn’t?

The main difference between Generation Y and others that have faced difficult times isn’t a behavioural or a personality issue - it’s that this generation’s opinions are amplified by social media use. Millennials have a voice like none other previously, but we’re squandering the benefit of hearing it.

The fact is that millennials may have voices on Twitter, but they don’t have status in the traditional adult perception - and unfortunately, there’s very little that they can do about it other than tweet. Until we recognise that young people are not the authors of their own economic woes but rather the casualty of mistakes made long before them, the “entitled” Generation Y will likely be stuck on their parents’ sofas for quite some time.

Thinking of take-out tonight? Here's the pick of Dublin's restaurant meals to go
3

Dining out: 12 of Dublin’s best restaurants with outdoor spaces
7

Wines for the weekend: Six French star buys to try
8

What is the going rate for a home in...Co Kerry?
9