Squash them or accept them? Life lessons from angry wasps

Coping: In the dark, every unkind thought about yourself finds a tender spot and stings 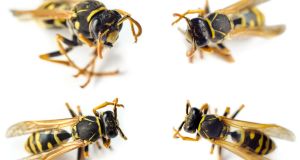 “We had an exterminator come, but he couldn’t find the nest either.” Photograph: iStock

It is night – one of those nights you can only get in the countryside, without street lights – and the blackness is entire. No particular shape emerges from it for translation by my brain into something recognisable. I lie on my back, staring at the ceiling, listening to the nothingness. Inside my gut is the familiar feeling that comes sometimes – the sensation of a large and heavy cold metal ball squashing my tender innards as though someone has unzipped my skin and shoved it underneath.

It leaves scant room for breathing, so the breaths come in and out in quick, slicing bursts. Thoughts come, sharp and unbidden. A stupid thing I said or did eight years ago. A fear about the future; a sense that maybe I will fail in some generalised way, and in many specific ways. I hear it then. The buzzing, a loud and angry baritone, unsolicited and frightening as the thoughts. A wasp.

Somewhere around here, there is a wasps’ nest. We find them in the house, scudding along the windows like angry little black and yellow boats intent on escape. Their striated abdomens throb with alien menace and the dark promise of sudden pain. “I will hurt you,” their presence seems to say. “You cannot anticipate me.” Unlike bees, they can happily sting more than once.

I have looked for the nest. I checked the attic for the humming chorus that would indicate the presence of their omphalos. When I didn’t find it there, I checked outside, trying not to crush the bluebells that have forced their way optimistically from the earth of the big weed patch like small blue promises. Despite mincing gingerly through the patch, I crushed some. The sharp, sappy fragrance of their demise made me feel guilty.

Suddenly, the image of my mother’s face the day before she died pushed into my mind with such force that I could feel the impact behind my eyes

As I strained over some old logs furred with moss to check up under the eaves of the house, a thought streaked across my brain: you should probably have achieved a lot more in your life by this point. I blinked and shook the thought out, then opened the shed door to look for the nest in there. Nothing. Back outside, a fat wasp whirred by with a sharp buzz, as though to poke fun. Suddenly, the image of my mother’s face the day before she died pushed into my mind with such force that I could feel the impact behind my eyes.

I searched until there was nowhere left to search, at least that I could think of. Still, I found them creeping across the windows and flittering heavily through the air like unwanted thoughts. Tonight, one has found its way into the bedroom, and its angry whirring is the chorus of the thoughts we all have at night. The deep worries the day will never let us fully immerse ourselves in. The hour between three and four can bring you close to madness. Then, every catastrophic idea, every unkind thought about yourself finds a tender spot and stings like a wasp. When the sun rises, it burns away most of the fear, and you can find yourself wondering how you got so maudlin, lying there in the dark.

Sometimes, unwanted and undeserved thoughts can come in the day as well. My mother’s face, a silly comment or error others have long forgotten. Often, they’ll surface in the shower, and the privacy and noise of the rushing water will allow you to exhale them in a burst of air and noise – a shout of ‘Bah!’ or a pained groan.

Finally, my partner suggested that since the nest was nowhere to be found, we would have to think differently about the wasps

I expressed my suspicions about the wasps’ nest to my partner after one of their number finally plucked up the nerve to sting me, swelling my wrist into a knobbled lemon with a protruding hand. We had an exterminator come, but he couldn’t find the nest either. I couldn’t let it go. On good days, when the sun warmed the house, they would come and give me something to worry about. Finally, my partner suggested that since the nest was nowhere to be found, we would have to think differently about the wasps. “Sometimes, you have to kill them. Squash them. Sometimes, you open a window and let them out. Sometimes, if you accept them, leave them be, they won’t hurt you.”