‘The birth of my children was the best non-rugby-related thing that ever happened to me. But my daughter moving to the other side of the world for 12 weeks is right up there’ 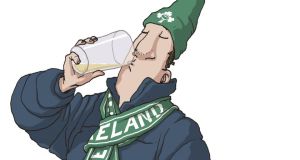 It’s here. A day I thought would never come. Our daughter is going to China for three months as port of a thing called the Mandarin Immersion Programme. We’re on our way to Mount Anville, where the bus is waiting to take Honor and

40 other students to the airport to embork on the adventure of a lifetime.

“Slow down,” Sorcha goes. “Ross, why are you driving so fast?”

I’m there, “I don’t want them to leave without her.”

And Honor, sitting in the back of the cor, looks up from her phone and goes, “He can’t wait to get rid of me. He’s been up since, like, four o’clock this morning.”

I’m there, “I just think it’s an amazing opportunity for you to sample another different culture and another way of life. And I’m saying that as someone who always regretted not signing for Connacht when it became obvious that Leinster didn’t want me because of my work-hord, drink-hord reputation.”

I’m suddenly thinking about the weekend ahead. Ireland against Canada in their first match of the World Cup. I’ll be able to watch it in my tight-fitting Ireland jersey without Honor drawing attention to my Minka Kelly hanging over the waist of my Cantos like an untrimmed pie crust.

Sorcha goes, “Ross, that was a red light you just drove through.”

In fairness, my wife is a lot more than upset than I am. She spent so long helping Honor to pack her six suitcases that she forgot to give her any of the crucial life advice that she’s going to need during her three months away from us. So now she’s furiously scrolling through Instagram to find some words of wisdom to give her, under the hashtags of “mother&daughter”, “lessons” and “change”.

And Honor turns to me and she’s like, “You really should think about putting the woman on daily hormone injections.”

Three months without having to listen to lines like that. I’m on the record as saying that the birth of my children was the best non-rugby-related thing that ever happened to me. But my daughter moving to the other side of the world for 12 weeks is right up there with that.

“You never know,” I go. “You might even like it over there and decide to stay until Christmas. I’m just throwing it out there.”

“Even if I love it over there,” she goes, “I’ll come back just to spite you – just to continue making your life a total focking misery.”

I already feel sorry for her host family – even though I’ve blocked their number in my phone.

We pull into the school. The cor pork is full of Volvo S60s and Volkswagen Touaregs and Mercedes S Classes and parents saying, I don’t know, “zaijian” to their kids.

I pull up. Honor goes, “Don’t you dare embarrass me in front of my friends.”

“Focking spare me,” Honor goes, opening the door and climbing out of the cor.

I know they’re worried about the problem of overpopulation in China, but wait till they get a load of our daughter. The whole country will turn celibate.

When it comes to my turn, I kiss her on the forehead and I go, “I’ll see you in November,” and she must cop the joy in my face because she goes, “I’m going to be ringing you, like, all the time”, and she means it as an actual threat.

I must make sure to block her number as well.

Off she goes, into the bus. We wave her off, then we get back into the cor. Sorcha is sobbing her hort out, while I go, “Waaa-hooo!” and all of the other parents suddenly look, which is when I realise that I’ve left the sunroof open.

I stort the cor and we head off. We’re actually back on the Stillorgan Dualler before either of us says anything. I’m there, “Oh my God, I’m going to get an Ian Madigan haircut for the World Cup. I’m just saying I’m totally free to do it now. I won’t have Honor ripping the pistachio out of me and telling me I’m having a midlife crisis.”

And that’s when Sorcha’s phone rings. I go, “Don’t answer it.”

I’m there, “They might have changed their minds about taking her. But the deal is done. We don’t do returns. I’m begging you, Sorcha. Please don’t answer that phone.”

She’s like, “Ross, don’t be ridiculous,” and she ends up answering it anyway.

Her phone is synched with the hands-free kit in my cor, so the voice comes over the speaker. It’s Miss Bowler, Honor’s teacher.

“It must have been very emotional,” she goes, “seeing the bus leave.”

I’m there, “It’s definitely gone, is it? You’re not ringing to say the deal is off.”

She laughs. She’s there, “No, I’m just ringing to tell you that you forgot Pang.”

She goes, “Pang is your exchange student. She’s going to be living with you for the next three months. Anyway, she’s here now if you want to come and get her.”

Sorcha looks at me, her hand over her mouth. In our rush to get rid of our daughter, we didn’t even bother reading the small print.

I end up having to turn the cor around.

Ten minutes later, we’re back at the school. I spot Miss Bowler in the playground, standing next to this – okay, it’s racist – but Chinesey -looking girl?

“This is Pang!” Miss Bowler goes.

I shake my head. I feel slightly suckered, like when you get a supermorket trolley with a wonky wheel.