Peter Murtagh’s big regret? Not hacking away instead of finishing college

How to be a Man: A young hack’s chat with the tánaiste in Lisbon is overtaken by de Valera’s death 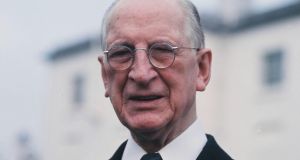 I don’t do regret – life’s far too short – but if forced to rummage through my memories, I always come back to 1975, to Lisbon, Portugal.

I went to college (Trinity) in 1972 and plunged myself into Trinity News, the main student newspaper at the time. That was when the penny dropped as to what life held for me and every Christmas and summer holiday thereafter, I tried to get jobs that were even vaguely related to newspapers. They included a stint in the London office of the Irish Independent, being a copyboy at the Associated Press wire agency also in London and being a lounge boy in the King and Keys pub on Fleet Street, haunt of hacks disreputable and inspiring from neighbouring newspapers the Daily Telegraph and Daily Express.

In the summer of 1975, I went to Portugal where, a year earlier, the military had overthrown the country’s dictatorship. The streets of Lisbon were alive with revolution.

The Associated Press had to have a photo record of each demo but, as several took place simultaneously each night and they only had two photographers, there was an opportunity for amateur me and my Praktica. And so I snapped away, face-on shots of the head of marches the others weren’t covering but needed, and got, as I recall, something like $20 per pic accepted.

It was enough to keep me in a dingy hotel, plus enough beer, cigarettes, bread, hardboiled eggs, vegetable soup and beans – usually eaten in dingy joints underneath some arches in the centre of the city – to keep me going.

I was in hack heaven.

On August 29th, Michael O’Leary, then tánaiste, stopped off on his way back to Dublin from holidays in the Algarve. I met him in the foyer of his Lisbon hotel and got a few words. I telephoned the Irish Independent breathlessly to tell them that the tánaiste had spoken – to me! – and how many words would they like? There was, briefly, silence at the other end before a voice pronounced.

All news is local and there’s always a bigger story. Lesson learned. My regret? Instead of coming back to finish college, I should have stayed and taken my chances.