Our Wedding Story: from a schoolroom in Madrid to a lakeside proposal

Teachers Nicola Marshall and Niall Tinney met while working abroad, and sealed their romance with two words of Spanish 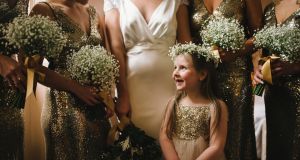 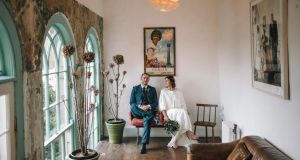 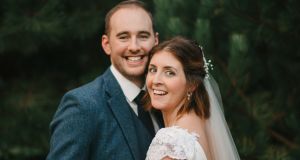 “He led me blindfolded on to the shore, and when I looked there was a canvas board with ‘Casate conmigo’ (‘Marry me’) written on it and covered in lights. We spent the night there, drinking prosecco.”

On December 31st, 2015, Nicola and Niall were married by family friends Rev Marisine Stanfield and Fr Macartan McQuaid, at Bellinter House in Navan.

The night before, 30 of the couple’s relatives stayed over to decorate the venue. Nicola got ready in the bridal suite with her four bridesmaids and her mother, Kate. Her dress was from Dawn Fitzgerald.

The bride’s brother Gregg and Niall’s sister Sinead read a story they had written about the couple, titled When N Met N. Another of Nicola’s brothers, Scott, read the poem These Hands and Niall’s other sister, Ciara, recited I Like You.

Niall’s mother, Jo, made the pine-cone place names for the tables and his father, Conn, made a sign for the newlyweds. Nicola’s father, Alan, made the table plan by attaching gold photo frames to a board. Bridesmaid Paula made the wedding cake.

Of Niall’s sister Ciara, Nicola said, gratefully: “I couldn’t even start to list all the things she bought, made and did for us.”

Niall’s father had organised for Gaby McArdle (who sang at his own wedding) to play music at the couple’s engagement party and when he brought the Magee Family Band along to sing with him, the couple asked them to play at their wedding.

The married couple’s first dance was to Redbone’s Come and Get Your Love.

Does sitting down fool our bodies into thinking they weigh less?
9

Ross O’Carroll-Kelly: We’re not American. This is how people from south Dublin talk?
Real news has value SUBSCRIBE