On cannabis, it’s still Ming versus the merciless

In the US, even Barack Obama wants an open discussion on drugs. In Ireland that debate is set to stagnate 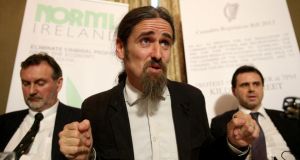 That’s not to say he’s bad at it. In many respects he’s exceptionally good. He has stuck with his principles from the earliest days, and he tried to change the system from within when, in November, he tabled
a Private Members’ Bill calling for the legalisation of the
drug. It was defeated by 111 votes to eight, so a moral victory was about all he was ever going to get, but it did trigger a half-decent Dáil debate on the subject.

And he’s done this while being the country’s most famous dope smoker, when the stereotype would suggest he could hardly get through a Dáil address without going blank every so often and asking what it was he was just talking about.

So everyone knows where he comes from on this subject. It’s there in the reputation,the nickname, the beard. He typifies much of the idea of the dope smoker (the TD element excepted, naturally). And the debate, such at is in Ireland, is already stymied by both Government parties’ cliche-heavy reluctance to countenance an honest discussion.

Yet most of the 38 per cent who support legislation, according to a recent Red C poll, can’t fit that stereotype. Most people who smoke cannabis, or have done or will do so, are unlikely to fit a stereotype. But as long as it continues to be Ming versus the Establishment the political debate in Ireland is unlikely to move beyond the predictable.

It’s clearly a live issue, as shown by the current case of blind Dundalk man Mark Fitsinomons, who asked gardaí to charge him with cannabis possession so that he could challenge the current law on medicinal use of the drug.

In the US the new poster boy in the discussion about cannabis is the president. We already knew Barack Obama used drugs in the past, but an interview with David Remnick of the New Yorker, published last Sunday, was a reminder of just how quickly the US’s discussion about cannabis has evolved from the position where it was deemed politically toxic to admit ever having inhaled a joint.

The Obama line that made most headlines was his view that “I don’t think it is more dangerous than alcohol”, although he also talked about the inequality of a justice system and how “we should not be locking up kids or individual users for long stretches of jail time when some of the folks who are writing those laws have probably done the same thing”.

He also talked about the problems of opening up access to the drug, that the legalisations in Colorado and Washington will be “a challenge”, and also the question of where to draw the line. (“If marijuana is fully legalised and at some point folks say, Well, we can come up with a negotiated dose of cocaine that we can show is not any more harmful than vodka, are we open to that?”)

Much of that wasn’t particularly novel, except for the fact that it came from the mouth of a US president. Obviously, context helps: the fair wind behind liberalisation, his personal experience, the changes in South American laws, and the fact that Obama is done with elections so can speak freely.

But his comments give an idea of how far the debate has come in US politics, and how it remains relatively stagnant among an Irish political leadership that appears to hold fast to the idea that an honest discussion about liberalisation would not be worth the political blowback.

An illustration: irishelection’s YouTube account features party leaders outlining their policies on cannabis in 2011. Enda Kenny’s dismissal of legalisation lasts all of five seconds. Eamon Gilmore’s response borders on fantastical, roaming into a reverie of a world where no children will ever need to be tempted by drugs again.

They have kept their promises in this regard, at least, and in the recent debate on legalisation the Government’s response was suitably dismissive, couched in excuses about international law, policies on smoking and its tackling of head shops.

And that’s where the political discussion will now stagnate, between two expected enemies, and probably unlikely to mature without a more surprising voice on the pro-legalisation side and a Government willing to have a frank, mature and reasonable discussion about drugs in modern Ireland. Don’t hold your breath.