New to the Parish: Glorence Makharinge moved to Ireland from South Africa in 2017 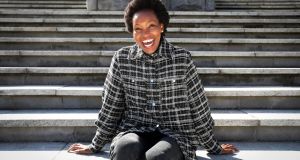 Two weeks before Glorence Makharinge moved to Ireland her father died. The South African civil engineer had already secured a scholarship to study in Dublin but was reluctant to leave her family at such a difficult time. In the weeks leading up to her departure her father had been sick but no one realised how serious the situation would become.

“My dad had heart problems and suffered from migraines but we didn’t think it was anything too serious. You know when someone gets sick but you think they’ll recover, that’s how we felt. We didn’t think he would die.

“It was the most difficult period of my life. I definitely wanted to stay in South Africa but I already had the scholarship and wasn’t able to transfer it to the next year. I knew my dad wouldn’t want me to lose the opportunity so I decided to go through with it. But going to a whole new place and not knowing anyone, I felt very lost.”

As a child, Makharinge’s parents worked hard to provide opportunities for their seven children. Before she was born, her father worked in the mines and would send money home to his wife in the family’s hometown of Giyani, about six hours from Johannesburg. When Makharinge’s father became ill from working deep underground and was dismissed from his job, the family set up a fruit and vegetable business.

“All the children had to help out. My dad would drive two hours outside town to buy supplies and when he got back us children and my mum had to sort through the truck. We had this work ethic from a young age. As difficult as it was we always had food on the table. My parents understood the value of an education. They were from a different generation, they met through an arranged marriage. But they inspired us to go further in life.”

When she was 19, Makharinge won a scholarship to study engineering at a university in Malaysia. The first member of her family to travel abroad, she spent the following four years in Asia.

“It was a whole new world – firstly they were Muslim and I was Christian. You had to follow so many rules around dress code and segregation between men and women in university dorms. It was difficult but I started to appreciate their way of life. I feel everyone should try a different way of living, it gave a new meaningfulness to my life.”

After her studies, Makharinge returned to South Africa where she worked as a civil engineer. “I was given a lot of opportunities in South Africa, which is crazy when you think I was working in the construction sector. You wouldn’t think you’d have those opportunities as a woman. I was given so much limelight to the point that it was too much, I started to doubt myself. There were so many men around me with much more experience. It was overwhelming.”

Makharinge decided to move into management consultancy and spent eight months with a company before deciding to return to full-time education. “I realised I needed better skills. I had the technical skills but not the business skills.”

In June 2017 she secured a scholarship to study for an MBA at Dublin Business School (DBS). Three months later, with a heavy heart following her father’s death, she arrived in Ireland.

Makharinge enjoyed the college course but was surprised to find classes quite easy. “Coming from engineering I was expecting it would be very difficult but that wasn’t the case. It just felt more introductory than a detailed course. But I made a lot of friends at DBS, that was the best part of it.”

Two months after arriving in Ireland Makharinge also met her boyfriend who she now lives with and who, she says, was a huge support as she tried to come to terms with her father’s death.

While studying, she found part-time work as a waitress in a Dublin burrito bar to pay for rent and living expenses. “I’d never worked as a waiter before and at first it felt like I have all this experience as an engineer, why am I doing such a demeaning job? But it was a very humbling experience and it changed me. I have so much more respect now for waiters doing that job.”

Makharinge originally planned to return to South Africa after graduating but after a year in Ireland, and with a loving boyfriend by her side, she felt quite settled. “Ireland was extremely safe and that felt amazing. We always feel scared in South Africa but don’t even realise it because we’re used to that lifestyle.”

A qualified civil engineer and MBA graduate, Makharinge expected to find work in the booming Irish economy without any issues. However, 12 months passed working full-time as a waitress and she still couldn’t find engineering work.

“I wanted to find out why I couldn’t get a job, I started to wonder was it because I’m a different race. Because I lived in Malaysia I’m used to being different so I tried not to attribute everything to race. I don’t have the energy for that. You can’t link everything to race, I don’t think it helps anyone.”

As the months passed, Makharinge realised Irish employers were reluctant to hire non-EEA nationals on the Stamp 1G graduate visa.

“When I applied for roles I’d get called back but they always asked whether I was from the EU or had Stamp 4. The moment I said I was on Stamp 1G they weren’t interested. Companies are not aware of the different ways to employ international workers here.”

Eventually, she was contacted by a recruitment agency, which organised an interview with the Marlet Property Group construction company. In August 2019 Makharinge was hired as a site engineer at the Apollo House development in central Dublin. Marlet has sponsored her critical skills visa, and Makharinge is handling the paperwork.

“The visa application has been seamless and straightforward, which begs the question, why are companies reluctant to fill the skills gap by employing foreign nationals?”

Makharinge visits her family in South Africa twice a year and enjoys living in Dublin. However, she still struggles with the Irish climate.

“I’m from a tropical area, I love the warmth. This is very different to any other place I’ve lived. I love the people here, they are great crack, and I love that I have my boyfriend here. But I don’t know whether I’ll stay here long term. I’m going to wait and see.”