The very-much-alive comedian helps pen his own obituary: ‘In attendance at his funeral were people who didn’t know him well enough to not come’ 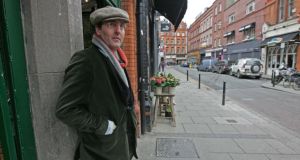 David McSavage:‘A desperation to prove myself to others, sponsored by an extreme feeling of unworthiness, is the thing that drives me to produce good things.’ Photograph: Eric Luke

My Obituary is a column in which people are given the chance to write their own obituaries while they are still alive. Some may be famous, others not so much, and we plan to include self-written obituaries of Irish Times readers who feel up to the task of writing them as a way of reflecting on their lives. Who and what has meant the most to you? What experiences and people changed your life? What would you like to leave behind, be it advice or property? What will people say about you at your funeral? Each contribution should be 650 words and reflect your own life experience and personality. To be part of the series, email myobituary @irishtimes.com

David McSavage died in his 80s, after great success in the US, in a nice New York brownstone with a lovely well-kept back garden, with a wooden shed that he spent most of his time in, secretly drinking vodka.

His funeral was a comedy show with his comedian mates offering a tailored eulogy, each one doing five minutes, hosted by John Colleary with a closing by PJ Gallagher. There was quite a quantity of overpriced food and lots of Opus One wine, at a cost of about $245 a bottle. Sinéad O’Connor sang a song so powerful, moving and raw that McSavage’s soul was carried into the spirit of the universe. This was followed by an authentic bluegrass band.

In attendance were people who didn’t know him well enough to not come, and his old street performing buddies, fellow comedians, directors, his agent, and his supportive ex-wife, Hannah, who had “the most shapely and perfect ass” McSavage had ever seen. Always very nurturing, she organised the funeral.

He was described by former colleagues as “generous, funny but impossible to work with, and yet so talented that we had to”. He was remembered as “a good father”, but also as “selfish and narcissistic”.

He had often confessed to being incapable of forming a truly loving partnership with another human being because that was not his role in life.

He was recalled as a leader who inspired generations of disaffected people because he believed society was mostly made up of institutions and people clinging to a false sense of meaning and purpose.

He had also always said that his greatest struggles were alcoholism “and having a large penis”.

His issues with his member had been publicly aired. At the Edinburgh Festival he was arrested for shouting “penis” repeatedly in the streets. He was also arrested in Temple Bar for pulling down his pants to reveal a posing pouch, leading to a charge of breach of the peace.

The closest people to him were his sons, Daniel and Jack. His siblings and other relatives, such as first cousin Ryan Tubridy, and Fianna Fáil political family – his father and a former minister, David Andrews, brother and a former TD, Barry Andrews, and cousin and a former TD Chris Andrews – loved him from a distance.

Otherwise, he didn’t get close to people. He found them annoying and had a much better relationship with objects such as his leather bag, his hat, Aran cardigan, Hamilton railroad grade pocket watch and tweed waistcoat. To his sons he left his collection of pocket watches.

His strengths too were recalled: determination, integrity, courage, open-mindedness, largeness of spirit and what he had always believed to be his great taste in clothing. Before he died, he said that the one quality he wanted to be remembered for was that “he would do anything to protect children”.

The trajectory of his life he once described as: “Mostly cloudy, with occasional sunny spells.” The philosophy that kept him going into old age was “persistence without expectation”.

He was his own worst enemy, so the only outcome was defeat. This summed up his career. He didn’t recognise his own achievements. “When you have this self-hatred thing going on and you achieve the ‘thing’ you’ve been striving for, whatever the thing is – TV show [such as The Savage Eye], acting job, etc – I’ve found that it hasn’t got the value I thought it would have, because it was me who achieved it, and if I can achieve it, it mustn’t be worth all that much.

“But that desperation to prove myself to others, sponsored by an extreme feeling of unworthiness, is the thing that drives me to work hard and produce good things. The lack of worth or emptiness is there because ultimately I don’t feel like I’m here, and in comparison to how long I’ve not been here, the emptiness I feel is right and fitting.”

“Amen,” the mourners said when this quote was offered as a prayer.

At the party afterwards, his most embarrassing moment was recalled. An appearance on The Late Late Show with Pat Kenny, where he had planned to sing a “very risky” song about Irish people’s obsession with property, but picked up a badly out-of-tune guitar, lost confidence, forgot all the words but offered the punchline. “Sniffed cocaine from a . . . ” At this point, Kenny said: “So that’s David McSavage . . . not everyone’s cup of tea.”

None. Things are the way they are. Acceptance is awesome.