Mike Murphy: ‘Gay Byrne telling me to f*** off was flabbergasting’

The broadcaster talks about Gaybo, his long TV career and his new show 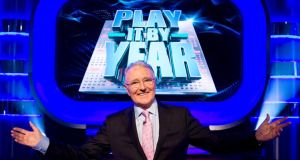 Mike Murphy was born in Dublin in 1941. He began working in RTÉ in the 1960s. In a career that spanned several decades, he presented popular programmes such as The Live Mike, quiz show Murphy’s Micro Quiz-M and Winning Streak, and he provided commentary over many years for the Eurovision.

He later became a property developer with Harcourt Developments but resigned five years ago. He returns to RTÉ for a special Christmas programme, Play it by Year, a gameshow that plunders the RTÉ archives before quizzing members of the public on their knowledge and memory of the events of the past 35 years.

Murphy has four children and lives in Florida and Dublin with his wife, Ann.

That I never played for the Lions against the All Blacks.

Putting my feet up on the table.

Richard Ford, the American novelist. One of the best living writers in the world.

One of the reasons I stopped going to the theatre was because I kept leaving at the interval, my thoughts being that if I was at home and not enjoying a programme I would just turn off the telly. I was getting more and more bored at the theatre. Having said that, I enjoy the work of Enda Walsh, Mark O’Rowe and Conor McPherson.

Are you a feminist?

Yes, but probably a very unlikely one.

What’s the worst thing anyone has ever said to you?

Probably when Gay Byrne asked me “do you understand the expression ‘f*** off?’ ” outside Trinity College during my candid camera show [The Live Mike]. Gay doesn’t swear in real life or on the telly, so that really was flabbergasting.

Three fried eggs, beans and mash, all mushed up together (another of my annoying habits is mushing up my food).

If you had a time machine, where would you go?

The Globe Theatre in London in the 1600s.

What do you worry about?

Money. And my kids.

What was the best advice you were ever given?

I remember the first TV series I did I was hammered by the critics. Tom McGrath in RTÉ said to me, “Ignore the critics. You command an audience of at least seven times more people than they will ever have.” He also told me never to respond to a critic and I never have.

What are you most afraid of?

Losing those close to me.

Your house is burning down. All your loved ones are safe. You can save one thing. What is it?

A man in a pub telling me loudly he hated my work and that his wife also hated me, “and she knows f*** all”.

When are you happiest?

Sitting on the beach in Naples, Florida, with Annie, knowing all is well with my loved ones and contemplating going for a long swim.

What was your best candid camera moment?

What do you owe your parents?

A strong sense of justice and adventure. My mother gave me a generosity of spirit.

If you were director general of RTÉ, what would you do?

As a colourful, interesting, articulate and generous person.

Why should people watch Play it by Year?

Well, I know people are going to watch it because they love nostalgia, and this programme is Reeling in the Years on wheels. Viewers are going to get such a kick out of simply looking back and remembering times past. I really believe viewers will get every bit as much enjoyment out of watching it as I did making it.