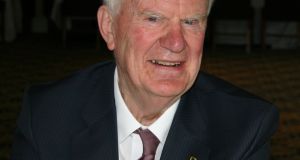 Michael Hayes: professor and head of the department of mathematical physics at University College Dublin

Michael Hayes, who died on January 1st after a long illness, was appointed professor and head of the department of mathematical physics at University College Dublin in 1973 and retired in 2001.

Throughout a long and distinguished career, he exerted a profound influence on many students and collaborated with many world-class researchers internationally. His genuine good nature and rich sense of humour enhanced his influence and won him widespread admiration and affection.

Michael Hayes was born in 1936 in Kilfinane village, Co Limerick, the second of four sons. The family moved to Limerick City where the boys attended CBS Sexton Street. He received an Aiken state scholarship and decided to study mathematical physics in University College Galway through Irish, gaining his BSc in 1956, followed by an MSc, and was awarded an NUI Travelling Studentship in 1957.

Mike chose to attend Brown University in the US, a world-leading centre for continuum mechanics, to study wave motion and the related concept of stability for a PhD under the direction of the renowned RS Rivlin. Future positions included a postdoctoral fellowship in Johns Hopkins University with the distinguished JL Eriksen, lecturer and reader posts at King’s College, joining the eminent AE Green’s research group (Newcastle-upon-Tyne), at the University of Ife (Ibadan, Nigeria) and at the University of East Anglia (Norwich), before his appointment to UCD in 1973.

In Newcastle, Mike met and married his beloved Colette who was to be his wife of 52 years. He described her as “the light of my life”.

He was a devoted family man and their six children, 16 grandchildren and extended family were a delight to him. He and Colette always offered warm hospitality to family, friends, colleagues and students. Mike had a strong social conscience; he was a lifelong committed member of the St Vincent de Paul society, and helped to establish Life Pregnancy Care to support women with crisis pregnancies.

At UCD he set high standards for teaching and research, and laid the foundation for a dynamic applied mathematics research group. An active member of faculty, academic council and governing body, he was not afraid to speak his mind.

Michael Hayes was an internationally outstanding, highly original applied mathematician, adept at both detailed calculation and broad understanding. He authored over 100 articles in leading international journals, and wrote two books and many book chapters.

Among these we can pick out two milestones. “A Note on Group Velocity” (Proceeding s of the Royal Society London) is an extremely elegant three-page paper greatly admired by fellow experts. It is incisive and succinct, and reveals a deep common underlying structure. His paper on all possible inhomogeneous plane waves able to propagate in a linear system demonstrated, in an entirely original manner, how geometrical properties of the ellipse can suggest new analytical methods and results.

He was elected secretary general of the International Union of Theoretical and Applied Mechanics or 1996-2000 and then was elected to its general assembly. He was a member of the Royal Irish Academy, serving on its council and as senior vice-president, and was elected to the Johns Hopkins Society of Scholars.

He was a man of integrity, loyal and generous to a fault, courteous, upright and honourable.

He is survived by his wife Colette, children Paddy, Máirín, Siobhán, Michael, Paul and Seán, brother Eugene and their families.