Forage with Wild Food Mary, dine at the gorgeous 17th-century Roundwood House and discover a lost village in the Slieve Blooms: Laois is under-rated 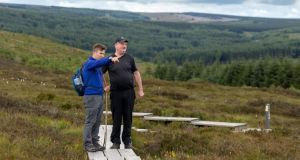 Harry McGee and Gerry Hanlon on the walk at the Ridge of Capard in the Slieve Blooms. Photograph: Dylan Vaughan

Poor Laois. For many tourists it’s just a name on a blurry sign as they zip through on the M7, M8 and M9 motorways to destinations where there is the neon of the sea and the tinsel of mountains.

When you flick through Lonely Planet, the portents are not good: “Little-visited Laois is often overlooked as drivers zoom past . . . ” is its sad introduction.

Yep, it’s a county that just can’t compete with the Atlantic counties, or even with Kilkenny or Tipperary, in the “come hither” department. In fairness to Lonely Planet, if you persevere for a few more sentences, the guide book points out that there is an allure to Laois. A real hidden corner of Ireland, it says. Or, a prime candidate for Lesser Spotted Ireland, in Irish Times speak.

Okay, any time I have sat down in January and plotted my summer holidays, Laois has never emerged at the top of the list. It might not be as dramatic as the rugged Macgillycuddy’s Reeks or the Skelligs or Aran or the Rock of Cashel. It might not jingle like Killarney or Tramore or Salthill or Strandhill. But this road less taken brought me to a more discreet and mildly magical place this summer.

Five kilometres from the town of Mountrath, the first wonderful stop is unveiled in the foothills of the Slieve Bloom mountains. Down an avenue roofed with trees and dappled with sunshine lies Roundwood House, an eye-pleasing Georgian House dating from the 17th century. This Palladian villa is gorgeous inside, with high ceilings, great windows, authentic period pieces and architecture.

The floorboards are like the deck of a galleon: ancient, well-trodden but comforting. A “don’t touch” museum it is not. It’s a guest house and restaurant, and part of the Hidden Ireland group.

The house is old but the vibe is young. Its owners, Hannah and Paddy Flynn, have taken over the running of the house in the past few years from Hannah’s parents, who ran it for three decades. The atmosphere is relaxed, laid-back and mellow. If a particular beverage company did Airbnb, this is what it would look and feel like. It’s very much a fully lived-in family home.

We have our four-year-old daughter, Sadhbh, with us. Within seconds she has struck up a friendship with the couple’s young daughters, Amelie (7) and Lucie (5), and over the next day the three explore every inch of the house and the amazing grounds of long-grassed meadows, with their broadleaf woodlands of oak, beech and ash. A serene rainless sky helps.

For a child this is what a carefree summer’s day is all about. Animals abound: hens, ducks, geese, two dogs, and cattle in the surrounding fields. There used to be a peacock but he was not replaced; he made a cacophony of noise during the night that undid the spectacular daytime displays of feathers.

There are other unexpected discoveries to be made in the woodlands and meadows. We meet Mary Bulfin, aka Wild Food Mary, a forager and chef, who acts as a guide on a novel journey. Mary is a fascinating guide, full of knowledge and information, with a lively disposition. We walk no more than 500m, through a woods, a field overgrown with grasses, a hedgerow, past an oak and through a rhododendron passage. But it involves a kind of epic journey that opens up a new micro-universe of grasses, nuts, flowers, plants and weeds, all either edible or medicinal.

Armed with a small utility knife, which she uses like a machete, Mary gathers massive mushrooms, which turn a suspicious toxic blue immediately after being picked. “Are they poisonous?” we ask. “Not at all, but those ones over there are,” she says, pointing to an innocuous-looking group of mushrooms with pointy heads.

And then there are the nettles, wild garlic, sloes, whin, St John’s wort and a host of other stuff. Earlier in the Slieve Blooms she picked fraughans – blueberries or bilberries that are native to this corner of Ireland – which have a wonderful tart, sweet taste. There was lots of information.

Be careful picking wild garlic leaves: they often grow next to bluebells, whose leaves are similar but as poisonous as they are beautiful. That long, ground-hugging sticky weed you find in your back garden is highly edible, healthy and can be juiced. In times past it was bunched together and used as a kind of sieve. It would catch the impurities as goat’s milk was poured through it. Whin (furze or gorse) is edible. You can use it in salads or make wine or tea from it.

Areal bonus of the excursion was that it provided the inspiration for dinner. Paddy is an excellent chef, and the meal he prepares that evening includes all that has been foraged. The blue mushrooms make a starter (we hesitate until Mary has taken her first bite). The garlic, fraughans and other plants all find their way into garnishes and dessert.

Like a lot of the Hidden Ireland houses, dinner is a communal affair, with all the guests sitting around one table. You kind of fear it will be all awkward small talk, but it turns out to be very convivial.

The next day I drive up into the heart of the Slieve Blooms, where I meet Gerry Hanlon, an amiable shopkeeper from Mountmellick and a stalwart of the local walking group. These mountains are not Ireland’s most vertical: the highest is about 500m and the tops tend to be round and a bit boggy compared with the more jagged mountains farther west.

But in the context of the midlands they are dramatic, rising suddenly out of the bogs. Unusually for a hill walk, we begin at the summit point, work our way down to the lowest point and come up again. That is at the Ridge of Capard, a viewing point where you can see a vast panorama of the midland plains that takes in 12 counties. In the far distance, you can see the Wicklow mountains, the Comeraghs, Galtymore, and the Knockmealdowns 103km away.

Here on the ridge, you can see the fruits of projects to open up the Slieve Blooms to recreational walkers: dozens of waymarked trails and boardwalks erected over the mushiest terrain. These trails criss-cross the range from more than half a dozen starting points, including Kinnitty in Co Offaly on the far side.

The walk we partake in is about 12km, a variation on an eco trail that skirts the river Barrow before rising through forest and meadows up the Ridge of Capard.

On our descent, Hanlon and I stay off the roads and tracks and follow obscure – and sometimes very overgrown – pathways through the wonderful broadleaf forests (and some newer coniferous growth) of the former Capard estate. The trailhead for this walk is at Glenbarrow, which is a nice picnic spot. On this Saturday its ample carpark is jammed: a good sign.

The walk from Glenbarrow includes a broad path among elegant tall trees near the river. Soon, you come to a waterfall named Clamp Hole. From there the path follows steeper ground uphill as it rises above the river valley.

We pass long-derelict stone quarries: what back-breaking toil must have been involved. We stay with the river for a while, walking up on wide flags of sandstone rocks that protrude above the water. The river’s water has eroded and smoothed the sandstone so much that it looks like the limestone flags of the Burren. And what do they look like? Holey Emmental cheese.

Another remarkable sight is the Lost Village, the ruins of a settlement of houses near the remote hilltop, some of which were occupied until the early 20th century. The most extraordinary ruins are of what was once a prosperous stone farmhouse, which has become engulfed by the forest.

Wild Food Mary’s tutorial the previous day has not been totally lost. Along the way, I spot some St John’s wort, along with an impressive blackthorn bush and its sloes. I do not come across any fraughans, however. They are a little bit like Laois, those native berries: a little overlooked and elusive but well worth the effort of the search.

Roundwood House, near Mountrath, in Co Laois. (roundwoodhouse.com). B&B is €75 per person sharing. Children under five are free; €25 per older child sharing. Dinner is €35 (three courses) or €55 (five courses). Children’s dinner is served at 6pm and costs €12.50.

Mary Bulfin conducts foraging walks. She is also a chef. Her Wild Beech Liqueur is available in selected off-licences. http://wildfoodmary.wordpress.com.

For information on walking routes and festivals in the Slieve Bloom region, visit the comprehensive website slievebloom.ie. It’s worth noting that there are some very attractive villages surrounding in this mountain range.