Obituary: Her relationship with her mother caused her to doubt her own ability to love 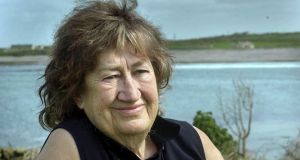 Leland Bardwell was a poet and writer who produced 13 books of poetry, fiction and memoir, stage plays and radio plays for both RTÉ and the BBC during the course of a remarkable life. One of the founding editors of literary magazine Cyphers, she was a member of the influential Irish Writers’ Co-operative in the 1970s and a founder of Sligo’s Scríobh Literary Festival.

Born in India to Irish parents, Leland grew up in Leixlip, Co Kildare, alongside a brother Christopher and sister Paloma. Her father Pat Hone, a railway engineer, was of the line that included two noted painters Nathaniel Hone, elder and younger, as well as the stained glass artist Evie, of whose work Leland was a great admirer.

It was a difficult relationship with her mother, however, that had the most lasting effect. Like the heroine of her partly autobiographical debut novel, Girl on a Bicycle (1977), the young Leland found some refuge in literature, reading her way through “all the books in Foyle’s twopenny lending library” in the town.

In time, however, the shadows of that relationship with her mother caused her to doubt her own ability to love. The grim humour that animates much of her work was, in part, her way of coping, of transforming the experience into something new.

And yet that work is all about affections and allegiances, about identifying with the hurt and the wounded. If she has a penchant for the macabre – one poem A Single Rose imagines her own autopsy, while another, Obituary for Leland Bardwell sees her ultimate destiny in her very name – she can also be hugely moving. In the poem A Mother Mourns Her Heroin-Addicted Daughter (written for a close friend), she speaks in the voice of the city that has failed the youngster: “I’ll raise my pavements to keep you safe. Open the balcony of my arms . . .”

And in another poem, depicting the nightmare of struggling young mothers like herself in Dublin’s urban wasteland of the 1980s, the chorus (and title) seems to loop incessantly: “Don’t touch them. Them’s your mammy’s pills.” It is no coincidence that her one short story collection is entitled Different Kinds of Love.

Leland’s movements, geographical and romantic, over her adult life were complex. Her marriage in 1947 to Michael Bardwell, by whom she had twins Anna and Billy, was marked by hardship and infidelity. After she left him, she moved to London to take up with his brother Brian, with whom she had a daughter, Jacqueline. But that relationship too came asunder and in time she moved to Dublin with Fintan MacLachlan, the most handsome man she had ever met and father of her three sons, Nicholas, Edward and John.

But somehow, amid the chaos and distraction, she continued to write, not only poems, but articles for newspapers, children’s stories for radio, and at least one lyric for her growing sons’ fledgling rock band, the barked-out chorus line of which, “I don’t wear uniforms,” expressed her own punky defiance as much as theirs.

By the late 1980s, she was conducting creative writing classes in the city centre and already inspiring a rising generation of mostly female writers.

When it comes to anthologies of Irish writing from the period, with few exceptions Leland was either ignored or reduced to a footnote. That her writing shifted between pure lyric (with surreal influences) and narrative impulse, made her, possibly, harder than others to categorise; but the omission was lazy, scandalous and indefensible.

Friendships with other writers, therefore – among them Eiléan Ní Chuilleanáin, Macdara Woods and Pearse Hutchinson, and more recently Dermot Healy, Brian Leyden and the poet Mary Branley – did much to sustain her. Her indomitable spirit survived a sequence of further relocations: from the new suburbs back into Dublin’s York Street, and from York Street to the gate lodge of the Tyrone Guthrie Centre at Annaghmakerrig where custodians Bernard and Mary Loughlin offered sanctuary, succour and love.

In 1992 she moved for the last time, northwest to the Sligo coast where, in a small sea-lashed cottage, she found a kind of peace. Her 2002 novel Mother to a Stranger was a surprise bestseller in Germany. In 2010, she received a short story award from Turkish PEN. In 2011, aged 89, she travelled to the Aldeburgh Poetry Festival, and was astonished to find herself rapturously received.

But the journeying that had taken her to Paris, Russia and as far as Colombia over the decades was drawing to a close. A stroke in 2013 hurt her in the one place she could still be hurt, in that part of the brain that processes language. Without reading and writing, what would be left for her? Her restless life was starting to blur.

By times anarchic, hilariously irreverent and heartbreakingly shy, Leland lived life to the full, whether at her cluttered desk or stepping out into the chill Atlantic, which she did until recent years, complaining and cursing all the while but fearless as an Olympian. Membership of Aosdána saved her life, and enabled her to complete at least four of her books – extending, in so many ways, the range of contemporary Irish writing.

For such a big personality, her carbon footprint was small. Her radio played Lyric FM, quietly. And for years and years she drove an ancient Triumph Herald, the back seat of which was composed almost entirely of old literary magazines and dog-eared typescripts. And yet somehow, just like language itself, it sustained her.

Leland Bardwell is survived by her children Billy and Anna, Jacqueline, Nicholas, Edward and John, by her half-brother Christopher, and her many cousins, grandchildren and great-grandchildren.

Expert tips: A psychotherapist on how to look after your relationships
8

Bill Taylor obituary: A Bohemians player and man of learning