Jennifer O’Connell: Worried about gun violence? Have a lollipop

There are many things I love about living in the US, but my children having to do a drill ‘in case a crazy person ever breaks into our school’ isn’t one of them 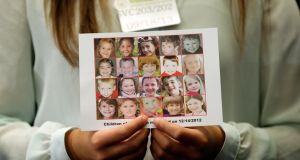 A photo with victims of the shooting at Sandy Hook Elementary School in late 2012. Photograph: Win McNamee/Getty Images

My children played a new game at school the other day. It was called Code Red. It was a game, but it wasn’t supposed to be fun.

“The teacher put desks and chairs against the door and then she put the rest of the desks on their sides and made us a fort,” my six-year-old explained in the car on the way home. “We all got down on the carpet and she gave us a lollipop and read us a story in a very, very, very soft voice and we stayed there for a very long time.”

My eight-year-old, who was in the computer lab when the alarm sounded, climbed under her desk. “It’s a drill in case a crazy person ever breaks into our school,” she said, far more matter-of-factly than I felt.

It has to be done, of course. I can name every one of the arguments why it has to be done. Columbine. Virginia Tech. Sandy Hook. Most recently, Marysville Pilchuck High.

There are many things I love about living in the US, but my children having to do rehearsals on how to stay alive should death ever come charging in the gate of their school is not one of them. I don’t want all that learning time lost while they cower under their desks. I don’t want them growing up afraid or, worse still, accepting the probability of gun violence as just another inconvenient fact of life.

And I really don’t want to dwell on all the terrifying possibilities these drills invite. I don’t want to have to think about the day that the distracting power of a lollipop might be all that stands between my boy and the barrel of a crazed shooter’s gun.

And yet, in the US, gun violence is so prevalent that drills such as this are routine in elementary schools. Once every three weeks, someone will pull out a weapon in a public place and start firing. The last time one of these incidents occupied the news media for more than a heartbeat was in the days after Christmas, when a two-year-old boy shot his mother dead while they were out shopping in Walmart. But even that story was quickly knocked off the front pages by Sarah Palin’s dog.

For many people, the solution to guns is more guns. Veronica Rutledge, the Idaho mother shot by her toddler in Walmart, was carrying her weapon in a “concealed carry handbag” that her husband had bought her for Christmas. I had never heard of these, but there’s a thriving trade in them on Amazon. You can also buy holsters masquerading as iPad cases on there, or bras that hide guns, or Bridget Jones-style granny pants designed to conceal both your muffin top and your Glock. “I never worry about it falling out when I go to the bathroom or wrestle on the ground with the kids,” one five-star appraisal of the knickers goes.

Some states even allow teachers to carry guns to school: a Utah teacher resigned from her job recently after her gun accidentally went off in the faculty bathroom, leaving her injured.

In this context, the gun violence statistics in the US manage to be both unsurprising and deeply horrifying. There is a deliberate public shooting incident every three weeks. But every day, at least 20 children end up in emergency rooms after an accidental shooting. Some of them are shot by their siblings, some by friends, some by adults.

If you’re an employee, the US government offers you protection against noise and back strain and second-hand smoke, but the best defence against guns it offers to children in this country is a lollipop and instructions on how to cower quietly.

Selfie sticks and onesies needed for a time capsule of 2015

Was the right to carry a weapon into Walmart what the American founding fathers had in mind when they drafted the second amendment? It is too late to ask them now and, sadly, there was no mention of it in the 220-year-time time capsule that was disinterred from underneath Massachusetts State House last week.

Revolutionary war heroes Sam Adams and Paul Revere buried the capsule under the Boston building in 1795, where it lay undisturbed until a water leak led to it being uncovered in December. The box was finally opened amid much fanfare, only to reveal a disappointing loot that included newspapers, a few coins, a medal and a plaque.

But it got me thinking about what you might include in a time capsule to be opened 220 years from now. After several minutes’ contemplation, I came up with the following: a selfie stick to capture the narcissistic essence of 2015; an adult-size Despicable Me onesie to showcase our traditional costume; and a brochure from Virgin Galactic to hark back to the glory days when flying into space was a glamorous undertaking. You’d also want some obsolete products of antiquity such as a Bic biro, a video library rental card and an envelope made of real paper. And for the sake of politeness, an open letter of apology for the state of the climate. If you can do better, let us know.