‘It’s a jolly job’: the postmen who deliver Christmas cheer

Noel Adamson and Damien Tuohy are close observers of their communities in Clontarf in Dublin and Gort in Galway. They both love their jobs and see the economy improving 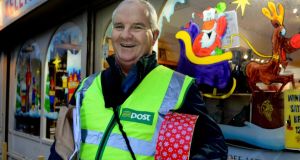 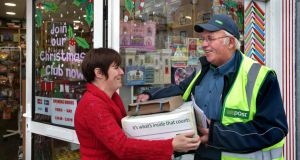 Noel Adamson, the postman on the Clontarf route in Dublin for the past 20 years, was born on Christmas Day. He thinks the economy is reviving. “You can see it in the amount of online shopping,” he says. “People buying dresses and personal items. And the amount of daddies I used to see round here, pushing prams. They’re all gone back to work now. ”

In Co Clare, Damien Tuohy, whose postal route takes him through three parishes, has observed the same thing. “There’s a little bit of an improvement,” he says. His route is “about a 100km round trip, from the town of Gort right into rural areas”.

Postmen and postwomen are close observers of the communities they work in. What started last year as an article I was writing on the decline of the Christmas box (annual tipping for postmen and binmen; the decline has been vertiginous) soon became a blow-by-blow analysis of daily life.

Adamson has been in the job for 34 years, and Tuohy for 35. Asked what the Government should do, they have their answers immediately. “They should simplify things,” says Tuohy. “People are ringing up about services and all they get is an answering machine. Communication, I’d say, is the biggest problem.”

Adamson feels the Government has not made the most of the expertise in the post office on issues such as the creation of the new postcode system, for example. He wants local post offices to provide more services, not fewer. By the same token, he wants everyone to avail of the An Post service that delivers direct to Santa up to December 18th. As long there is a return address supplied, he delivers Santa’s replies straight back, with a postmark from the North Pole.

Their own role at Christmas is very clear to both men. “People have been buying [online] for the last couple of months,” says Tuohy. “You make an arrangement to meet them down the road, so you can hand over the parcels in secret. You take that in your stride, to be honest. You have to look after the people you’re serving.”

Of course, there have been delays in the past. “It’s not nice to deliver a Christmas present to someone in January. The children are delighted but you can see the adults going, ‘That was supposed [to be for] Christmas’, ” says Adamson.

Online shopping can only be a good thing, as far as Adamson is concerned, even though delivery, with the customer having to sign an electronic scanner, is now much more time-consuming than it used to be. “We’re what we call the last mile,” he says. “I’m glad, because at the end of the day it’ll secure jobs . . . The post is down by 30 per cent. E-billing has had a huge impact on our business.”

The two men, who do not know each other, say remarkably similar things.

“It’s a job I love,” says Adamson. “It’s the interaction with the people. I had the option of going indoors years ago, but I wouldn’t take it. Most mornings I’m up at 4.45. We work through our lunch break and then finish between 12 and 1.”

“It’s a jolly job,” says Tuohy. “And it’s up to yourself to be jolly with it. People appreciate the small things.”

Christmas has its own routine, says Adamson. “It’s usually a 12-hour day. It’s an achievement just to get out of the office. I get more of a Christmas feeling on this route because there are four schools on it. Some of the mammies I deliver to now were in some of those schools when I started.” Last year, a teacher at Greenlanes National School on Seafield Avenue got the children in her class to make Adamson a Christmas card: “The effort that went to make it, the thought that went into it. I take that on board,” he says.

Interviewed for this newspaper last year on the subject of the decline of the Christmas box, Adamson was not anticipating much. And he didn’t get much. This year he says: “Last year the Christmas boxes were very low. I don’t know what way to put it. You’re kind of surprised now if someone gives you a Christmas box. Quite dumbstruck.”

Both Tuohy and Adamson agree it is the people who don’t have money who are the people most likely to give it. Last year, Tuohy implied he would often be embarrassed to take money offered at Christmas. “I say, ‘Give it to the child’.”

“The most awkward part of our job,” says Adamson, “is when a family separates. Then someone is saying to you, ‘I don’t want his mail’.” As it is, now that the economy has revived slightly, “the elderly are the people we see all the time”, he says.

The recession in Gort

Gort is a commuter town for Galway city and for Ennis, and Tuohy saw the recession hit it like a hurricane. “The bag of timber instead of the heating oil,” as he says. “There’s no building going on now. They have JobBridge, but that’s only €50 extra. The other thing is, priests are getting scarce. The guards now, there is less of a decline, but they’re coming from farther afield.”

Older people are a constant concern. “They’re frightened,” says Tuohy. “You’ve to ring the bell now. A lot of old people are very trusting [about callers].”

On the plus side, he says, communities are “ a little bit more alert” about strange cars in their local area. “And with the unemployment there are more people around.”

Adamson feels the same way about old people on his Dublin route. “ They have minor problems sometimes. They’re locked out. Their alarm has gone off. You’d take the bins in for them, close the gates. They’re happy with that. It’s only a small thing,” he says. “ I’d see that as part of the job.” Recently, he asked a woman to meet him on the road outside her mother’s house. “Of course she didn’t know what to think when I said that,” he says. “But I had to tell her that I’d noticed that her mother would be coming home and not knowing which house was her house. You see things.”

“A lot of the small shops are feeling the pinch,” says Tuohy. “A lot of the pubs are nearly closed up. There’s talk of a lot of them getting out of it after Christmas.” But, he says, it’s worth remembering that “rural people are very resilient”.

Is my drunken, abusive husband capable of change?
6