‘Isn’t it better to get rid of your auld sins than end up in the fires of hell?’

Family Fortunes: Seven Dublin churches on Holy Thursday, then bread and butter on the steps of St Mary’s Pro-Cathedral 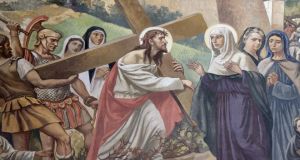 Sr Agnes went around checking who got their ashes, marching the ones who didn’t up to the church at the top of the road .The morning was chilly, catching the girls’ sombre mood as she lectured them about being good Catholics.

“Isn’t it better to get rid of your auld sins than end up in the fires of hell?”

Of course they were delighted to be getting out of the classroom for an hour while the rest of us carried on with our schoolwork. Sometimes it doesn’t pay to be good, I thought, as I settled down to maths. After all, I had made the ultimate sacrifice, giving up sweets. It was my birthday in Lent, so as not to feel too deprived I saved any sweets I got in an old red Oxo tin Auntie Polly had given me.

To gain the indulgences we had to say seven Our Fathers, seven Hail Marys and seven Glory Bes. We didn’t really understand these things, but sure didn’t it make us feel good?

“Sure you’ll have a great party on Easter Sunday after the Lord has risen,” Sr Agnes said. I felt she was reading my mind.

At last Holy Week arrived. Seven weeks of Lent over, seven deadly sins, seven churches to visit. We were only kids, remember, and our parents had no cars, so it was shanks’ mare.

I collected my pals – Cora Eustace, Terry Swinburne, Philly Murray – and we set off early. The morning was beautiful, the warm sun on our backs as we traipsed the streets of Dublin. First St Agnes, then down to St Bernadette’s, next Mount Argus, the Holy Rosary and St Francis on Meath Street, before Whitefriar Street and, finally, St Mary’s Pro-Cathedral, on Marlborough Street.

To gain the indulgences we had to say seven Our Fathers, seven Hail Marys and seven Glory Bes. We didn’t really understand these things, but sure didn’t it make us feel good?

After that we sat on the steps of the pro-cathedral to have our lunch of bread-and-butter sandwiches, with water from a lemonade bottle. Fasting was still the order of the day.

We were tired but happy on our way home – until we met my brother and his pals. We were not amused as we discovered that while we had gone to pains to recite the whole prayer they had adopted the shorter version, Hail Mary, Holy Mary.

By the time we reached home Jesus had had his Last Supper.