Irish Women of the World: Going the distance with Sonia O’Sullivan

To celebrate International Women's Day, we've found an outstanding bunch of Irish women whose influence is felt around the world. Top figures in sport include a striker and a CEO, a golfer and a goalie 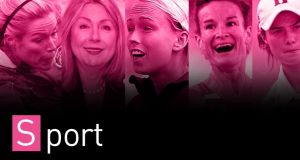 Wow, Susan Whelan has sure made her mark on England’s Premier League. Who would have predicted that following a 14th-place finish last season, Leicester City FC might (and whisper it) lift the Premiership trophy in 2016.

And who would have predicted that an unfashionable club in the English midlands led by a woman born in Dublin would ascend to soccer’s top and most lucrative table? When Whelan took the reins at the Foxes five years ago, even she would have admitted she was a stranger to the offside rule. King Power and its owner Vichai Raksriaksorn had persuaded Whelan to join the group when she was working in retail in Bangkok. The group bought Leicester, and a year later, Whelan became CEO.

Whelan has kept her hands off the ball, leaving those in the know to handle the football side of things, while steaming ahead to lead the business. And lead it very well.

The club, which cost € 40 million, took €95 million in television and Premier League prize money alone last season. That may be € 120 million this year. If Leicester earn themselves some Champions League football next season, income will only grow. “She comes across as a very astute business woman,” says Rob Tanner, football correspondent with the Leicester Mercury. Well played Whelan.

Remember Stephanie Roche’s magnificent three-touch-and-in goal for Peamount United against Wexford Youths in October 2013. No? It was the strike that bagged Roche a nomination for Fifa’s Puskás Award in 2015. Maybe you hadn’t taken much notice of Fifa’s goal-of-the-year award until the young Irish woman from Cabinteely bagged herself a place on the shortlist of three alongside Colombia’s James Rodriguez and Robin Van Persie of the Netherlands. Rodriguez and Van Persie were already household names. Roche was to join them. She came second.

Now with Sunderland AFC Ladies, Roche continues to play for the Republic of Ireland at international level and has also continued to score the odd humdinger, including her goal against World Cup finalists Costa Rica in Croatia last year.

From being the only girl on the Dublin District Schoolboys League team to earning her living playing professional football, not to mention her wide portfolio of media engagements, Roche continues to break the mould for Irishwomen in sport.

Her school-day coach Brendan Higgins has no doubts that Roche’s star will continue to rise – and with it women’s football. “She was very equal to the boys. She had dedication. She had speed. She had an eye for goal [as everyone now knows]. And she had a great left foot.”

When she was immortalised in bronze in her native Cobh, Co Cork, last August it was probably the only time Ireland’s greatest athlete, Sonia O’Sullivan has ever stood still.

It has been a funny old time for O’Sullivan recently. As everyone suspected, news of China’s doping programme confirmed O’Sullivan should have won the 3,000m and 1,500m fair and square at the 1993 World Athletics Championships in Stuttgart.

But O’Sullivan has no need for base metal. “After 23 years I can wait for the full admission and confirmation. I don’t want a package with two gold medals. That wouldn’t change a thing. I just want to know that in 1993 I did everything I could to be the best I could be, to be the best in the world,” O’Sullivan wrote in her weekly Irish Times column recently.

O’Sullivan notched up world championship golds on the track and in cross-country, European and Student Games titles and that 10,000m silver at the Sydney 2000 Olympics. When, as the favourite, she pulled up and out of 5,000m final in Atlanta 1996, many an Irish tear was shed.

Having lived in the US, London and Australia since leaving Cork when she was 17, O’Sullivan is now settled in Melbourne with her family. She still runs and has interests and friends and associates all over the world from her continued role in athletics.

In March 2008, O’Sullivan was appointed team manager of the Australian team for the 2008 IAAF World Cross Country Championships.

She was chef d’equipe for the Irish team in London in 2012. And O’Sullivan’s trans-global influence and work continues to this day. There is literally no stopping her.

Superstardom is beckoning to Leona Maguire, even if the 21-year-old from Co Cavan - who is on a golfing scholarship to Duke University in the United States - remains the most level-headed of golfers with her feet firmly on the ground and her head also stuck in academic workbooks.

In the second year of student life stateside, Maguire – who has her twin sister Lisa for company on campus – has emerged as the most genuine of articles. In May 2015 she assumed the Number One ranking in the world amateur rankings and has remained on top of the pile ever since, with a capacity to win championships that make a move into the professional ranks only a matter of time. When, not if!

World Number One, Maguire, claimed the prestigious Mark H McCormack Medal at the end of 2015, a tribute to her ranking as the undisputed top amateur in the world, which brought with it invites into this year’s US Women’s Open in California and the Richoh Women’s British Open at Woburn. Although still an amateur she is also set to represent Ireland in the Olympic Games in Rio in August, having amassed sufficient qualifying points on her rare excursions into professional events.

Maguire – who learnt her craft on the parkland course at Slieve Russell in Co Cavan after taking up golf as a 10-year-old - has represented Europe in the Junior Solheim Cup and Junior Ryder Cup and is set to lead Britain and Ireland against the USA in the Curtis Cup at Dun Laoghaire Golf Club in June, in between rubbing shoulders with the pros at the Major championships.

Gates at Arsenal matches have been noticeably larger since England went out 2-1 in their semi-final to Japan in last summer’s Women’s World Cup. And goalkeeper Emma Byrne has no problem with that – even if her first love remains her own Republic of Ireland, who didn’t qualify for the tournament. Byrne still made her mark on the Women’s World Cup, though, commenting for Eurosport.

Arsenal’s longest-serving player has had aspiring replacements sniffing at her heels for decades – first she saw off Rebecca Spencer to Birmingham, then England international Siobhan Chamberlain went on loan to Notts County. Now Sari van Veenendaal, the Dutch number one keeper, is at the north London club.

Byrne is not yet ready to hang up her gloves, but she is preparing to do different things and her degree in broadcasting and journalism should add to her Eurosport experience. There’s also coaching. She told Arsenal’s blog last year that she has been asked to “get involved with that for the Irish national side”.

Byrne still has a lot of games to play and she is distinguishing herself with her increased levels of shouting (changes to the league means she has to shout louder, she says) and her distinctive gumshield (she got her front four teeth knocked out playing for Ireland in March).
She is going to keep the gumshield. “It’s just not worth the pain,” she says. As for the yelling: “I’ve become more vocal because I want less to do”. Looks like Byrne will actually have a lot more to do.

The patriotic cellist who refused to play Rule, Britannia!
4

Coronavirus is new, but your immune system might still recognise it
7

When will the first Covid-19 vaccine be used in Ireland?
9

No buns, no sauce, no fries, no wedges: How to make the perfect chip butty
10