‘I was once hardcore in my pro-life views, today I am marching for choice’ 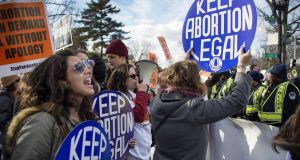 US pro-choice activists block the road in front of police who are escorting the March For Life in Washington DC in 2015. The annual “pro-life” march commemorates the anniversary of the Supreme Court’s Roe v Wade decision. Photograph: Jim Watson/AFP/Getty Images

To the teachers and parents at my Catholic school in Texas, we were, at 11 years of age, old enough to take a stand on abortion.

To coincide with “Walk for Life” in Washington DC - an anti-abortion march held annually on the “sombre anniversary” of Roe v Wade, the 1973 landmark decision that effectively legalised abortion in the US - our class was to walk a few blocks down the street from our school and back. Students had a choice: walk with the group or stay in the classroom and do homework. This was a Catholic school, in Texas: walk or be branded a baby killer.

My pre-pubescent classmates and I were given white T-shirts emblazoned with the words “Walk for Life” in large capital letters and told to pull them on over our Oxfords. We then set out single-file, righteously marching against something most Americans believe should be available to women.

As our little protest moved along a busy street, a car slowed, the driver honked her horn and glared at the teachers leading us. She looked like she was yelling something, her words muffled by the closed car window and the passing traffic. I didn’t know what to make of this and I wouldn’t understand the expression on her face until years later, but I was able to identify it: rage.

I grew up “pro-life”. The hardcore kind. Life begins at conception, period. I didn’t believe in exceptions or special circumstances, just self-control: if you don’t want to be pregnant, don’t have sex.

My view was in line with what United Nations human-rights experts called Ireland’s near-absolute ban on abortion earlier this year: “discrimination and cruel, inhuman, or degrading”. I believed in the myth that women who have abortions are entitled, selfish and licentious.

But these weren’t opinions I arrived at myself. I was a kid, prone to believe adults I trusted and knew to be kind and well-meaning. That was the only time I took part in an anti-abortion protest. My own views I developed later, when I was no longer flat-chested, unable to conceive a child and still hazy on the mechanics of sex.

In my late teens, my family moved to Ireland. I hadn’t thought much about abortion up until then, it wasn’t on my radar, but that changed at an age when these things really started to matter.

A year after our move, I returned to the US to visit friends. One evening, surrounded by my American girlfriends who were talking candidly about relationships, I became distracted. As the conversation continued around me, I wondered what I would do if I became pregnant.

I pictured my insides, a tiny ball of dividing cells stuck to me, supported by me, so obviously of me. That I would have no choice but to allow it to continue to live and grow inside me - regardless of how it got there, its health, my health, my ability to support it once I had given birth to it - was dumbfounding

That I could be imprisoned for up to 14 years (the average sentence for rape in Ireland is 10 years) for procuring an abortion, a procedure generally available to women in the western world, tipped what already felt like an intrinsic, gross injustice into the realm of the absurd.

At that moment, sitting in a darkened dorm room surrounded by women who had a right we no longer shared, I finally understood the ticked-off woman in the car that day: rage bubbled under my skin.

According to an Irish Times/Ipsos MRBI poll earlier this year, 67 per cent of voters say they are in favour of repealing the Eighth Amendment to the Constitution - which guarantees the equal right to life of the unborn and the mother - to allow for abortion in cases of rape and fatal foetal abnormalities.

This is great news, but we should see abortion not just as the answer to a dire situation, but as a pragmatic, positive choice for some women. Isn’t it a good thing for a woman to choose to bring a child into the world? To consider her ability to provide for a child, her readiness for motherhood, its impact on her health, its impact on the lives of children she might already have?

Why is it morally good to allow the unborn to develop irrespective of the quality of life it will have or how that life might impact the lives of others?

Earlier this year, a study by the World Health Organisation (which recommends women have access to safe abortion services) and Guttmacher Institute estimated that between 2010 and 2014, there were 35 abortions per 1,000 women aged 15 to 44 worldwide. That’s more than 56 million abortions per year. In Ireland, reproductive-rights groups estimate that on average 10 women travel to Britain every day for an abortion. This does not account for the women who travel to other European countries for abortions or who procure abortions in Ireland using pills.

So abortion happens. It’s not unique to the fringes of society. Women who have abortions are not outliers. And they are not alone. They are supported by friends, family members, partners and spouses, the best friend who also pays for a seat on the plane, the husband who finds a babysitter to mind the kids, the mum who makes cups of tea in the hotel room.

It’s important for people to know this and to see it represented by the likes of stigma-breaking “Repeal” jumpers and the annual March for Choice. When something large and loud stands in front of you, it’s difficult to ignore. Almost 20 years after my Walk for Life stint, I’ll be marching for choice this weekend.