‘I see one placard at the next auction and the doggy gets it. Cah-peesh?’ 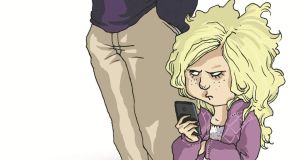 I ask Honor to check my text messages, because it’s one thing I never do while I’m driving – and anyway I’m only two points away from losing my licence.

I’m there, “Maybe one or two goys off the Ireland rugby team. Don’t forget, there’s a World Cup coming up. A lot of them rely on my words of wisdom to settle them.”

She actually laughs in a really, like, cruel way? She’s like, “Maybe you’ll get a call from the players who don’t get into the squad – because you know what it feels like to not play in a World Cup, don’t you?”

She definitely knows what buttons to press with me. I’m actually proud of myself, though, because I manage not to cry. She’s like, “Where are we going anyway?” I’m there, “We’ re going to visit Dáibhéid Straide – as in, like, Dáibhéid Straide of the New Land League?”

“Why are we going to see him?”

“Because if he doesn’t call off the disruptions to our distressed property auctions and the pickets at our open house weekends, I’m going to lose my job with Hook, Lyon and Sinker.”

“Tell him you’ll break every one of his fingers,” she goes, in her sweet little southside voice. “And that’ll be a down-payment on two dislocated kneecaps and a fractured skull.”

“I really wish your brother hadn’t taken you on that water meter installation protest,” I go. “I’ve seen definite changes in you.” She goes, “Ronan said it’s the only language people understand.”

I’m like, “Not on this side of the city. I’m going to ask him in a very reasonable way to call off the protests. And if he says no, then I’ll probably end up begging him.”

It is a bit late in the day – because we’re suddenly outside his gaff, a humongous pad on Seapoint Avenue, which surprises me, it has to be said. The dude is clearly minted and usually it’s only poor people you hear banging on about “rights”.

He actually has a little chuckle to himself when he sees me standing on his doorstep. He goes, “I wondered how long it would take you to come crawling to my door.”

I’m there, “I can assure you, I haven’t come crawling. Not yet.” He’s holding a little Dachshund, by the way. Honor goes, “Oh my God, I love him! What’s his name?”

“Ludvig,” the dude goes, a bit defensively. Honor’s like, “Can I play with him?” clapping her two hands together. Which is weird, because I’ve never known her to get excited about, well, anything before.

“Well, I don’t see why not,” Straide goes. “I can’t blame you for the sins of your father,” then he puts the dog down on the floor and it runs off in the direction of the kitchen, Honor chasing after it, laughing excitedly. He leaves me standing at the front door, by the way.

He’s there, “You don’t expect me to feel sympathy for you? How much sympathy did you show the Forsyth family when the bank was in the process of repossessing Positano on Shrewsbury Road? Or the Edgeworths when they were being evicted from Tramonti in Leopardstown. No sympathy whatsoever. You got in and you measured up while the houses were still legally theirs. You and your boss – you’re vultures. Now you’re getting everything that’s coming to you.”

All of a sudden, I hear an animal yelp in the kitchen. I decide to ignore it. I’m still confident of talking the dude around. If Honor’s torturing Ludvig, it might not be wise to draw his attention to the fact.

“Again,” I go, “the angle I’d prefer to push is the whole wife-and-child-to-support angle. You’re literally taking bread out of our mouths.”

“The New Land League is finally having its day,” he goes. “I wish Vincent Browne were here to see this!”

There’s another yelp from the kitchen. Straide looks over his shoulder, going, “What the hell is that girl doing to Ludvig?”

“Okay,” I go, “I didn’t want to have to do this,” and I drop to my knees, with my two hands joined in prayer. I’m like, “Please, please, please call off the protests – I’m begging you.”

Straide goes, “Ludvig’s never hurt anyone in his life?”

Honor goes, “I’m sure they’ll be able to match the teeth morks in my hand with his dental records before they put him down.”

Straide’s there, “You obviously provoked him.”

“Anyhoo,” Honor goes, “I’d love to stay and chat, but I think I might need a tetanus injection.”

“Okay,” he goes turning to me then, “I’ll call off the protests – if we can keep this just between ourselves.”

Honor morches out to the cor. Her work here is done. I stand up. Straide’s like, “Please don’t take away my little dog.”

I’m there, “I’m taking a photograph of that bite mork. I see one placard at the next auction and the doggy gets it. Cah-peesh?”

He nods. I follow Honor out to the cor. She’s already sitting in the front passenger seat. She’s like, “You were begging him!” her voice dripping with disgust. “You’re actually pathetic.” I’m there, “I wasn’t begging him. I knew what you were doing and I was just stalling for time.”

“You’re so sad,” she goes. “I want four grand.” And of course what else am I going to say, except, “Honor, you can have anything you want.”