I know vaguely how to be a good person. A good man? I haven’t a clue

How to be a Man: From the outside, it looks very difficult to be man today 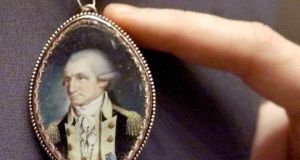 A miniature portrait of the first president of the United States, George Washington, painted by Irish artist John Ramage. Washington once wrote a guide on how to behave as a man. Photograph: Brad Rickerby/Reuters

At the age of about 15, the boy who would later become the first president of the United States, George Washington, wrote the Rules of Civility & Decent Behavior in Company & Conversation. Etiquette guides for young men and women (different guides, naturally) were common at this time – 1747 – providing useful instruction in how to conduct oneself in society. For the most part, if you conducted yourself according to the rules assigned to you, then you fulfilled the social expectations around your gender. Of course these rules changed depending on variables such as age and class, but for the most part, a gentleman was the pinnacle of masculine desirability.

Washington’s guide contains some very useful advice – “Undertake not to teach your equal in the art himself Professes, it Savours of arrogance”. That one is essentially a moratorium on mansplaining, which – let us be honest – is primarily a male habit, and can be aimed at either men or women. Just last week I sat amid a tense group while a middle-aged man monologued on “marine life” to someone who is . . . an oceanographer. There is more practical advice too – do not, Washington counsels, “cut bread with your knife greasy”. Most of the rules translate roughly to being courteous, hygienic, polite, and kind to your inferiors – a group which at that time included women, children, the poor and those with any form of disability.

It was all pretty straightforward in a way that, though archaic and undoubtedly bigoted, seems positively romantic now. Men suffer, though in different ways and different degrees, from a similar affliction to the one women have had thrust upon them. They are consistently generalised. The best of feminism proliferates the idea that women are not a homogenous group to be judged and ousted and limited, but a collective of widely varied individuals who, when given freedom, will make varied choices about the direction of our own lives. In a post-feminist world (if we ever get there), we will be free to choose the direction of our own lives with no reference to our gender at all, and as little to our biology as is functionally possible. We are stymied somewhat by that, and likely will continue to be.

I can’t imagine what it means to be a man today. From the outside, it looks very difficult. We are in a period of flux in relation to the role of gender in society, the extent to which it is a construct, and precisely what its relationship to biological sex is. The social expectations on men are immense, and you can no longer secure the respect of your peers by being tidy and polite, or an impressive horseman who doesn’t cut his bread with a greasy knife.

Of 55 workplace fatalities reported in 2015 by the HSA, 54 were men. This is relatively common. By a vast majority, men do the more dangerous jobs and consequently die at work more often. In 2013, five times more men in Ireland committed suicide than women. Male circumcision, though just as horrifically brutal and senseless a practice as female circumcision (except when performed out of medical necessity, which is the minority of cases) is widely accepted the world over. Millions of little boys have their penises cut and mutilated for arbitrary reasons of culture and religion, often with a knife less sanitary than the one Washington recommended men cut their bread with – we never really read about the injustice of that.

With the general social acceptance of the privileges men enjoy as a collective, it is easy to ignore the suffering and struggle of individual men and boys. They are expected to be decisive but not pushy, assertive but not aggressive, kind but not soft, competent but not detached. If they err in any of these respects, we tend to react with vitriol. Because historically men have often victimised women, we fail to recognise that they can themselves be victimised, that they too can be slapped by the open palm of sexism, and suffer under the presumption of what they’re “supposed” to be. A man can’t tell me how to be a woman. Anyone who is interested in equality knows it works both ways. I know vaguely how to be a good person. A good man? I haven’t a clue.

To add your voice to this series, email howtobeaman@irishtimes.com