Heiress famous for tropical designs worn by the wealthy 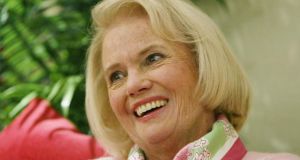 Lilly Pulitzer, who died last Sunday at her home in Florida aged 81, was a Palm Beach princess of prints who created an enduring fashion uniform for wealthy socialites and jet-setters almost by accident.

As the story goes, in its most romanticised version, Pulitzer’s fashion empire, famous for its tropical-print shift dresses and lighthearted embrace of jarring colour combinations like flamingo pink and apple green, was born out of necessity.

In 1959, after opening a juice stand in Palm Beach, Pulitzer, an heiress herself who had married young into the wealthy publishing family, needed a dress that would camouflage stains of orange and grapefruit spills. So she had one made, creating a look that proved to be so popular it would become a mark of membership for old-money families at play for more than five decades.

At its height in the 1960s and 1970s, Lilly Pulitzer had sales of more than $15 million and clients such as Jacqueline Kennedy. Revived by a licensing company two decades ago, the label now has sales of roughly $75 million with modern takes on many of her original prints.


Privileged upbringing
Lillian Lee McKim was born in Roslyn, New York, the second of three daughters of Robert and Lillian McKim. Her mother, whose maiden name was Bostwick, was an heiress to the Standard Oil fortune and left her husband for racing enthusiast Ogden Phipps in 1937.

Lilly and her sisters, Mimsy and Flossie, had a privileged upbringing. She briefly attended college, but left to work as a nurse’s aide. While on holiday in Palm Beach, she met Herbert “Peter” Pulitzer jnr, a handsome grandson of the publisher Joseph Pulitzer, and shocked her family by eloping with him in 1952. The young couple settled among the citrus groves of the Pulitzer estate, throwing wild parties and generally ignoring whatever was expected of them from their society peers.

They had had three children within five years, when Pulitzer returned to New York suffering from what was described as a nervous collapse, and a marriage, she said, that was driving her crazy. When she came back to Florida, she started selling fruit from her husband’s citrus groves, and then opened a juice stand with Laura Robbins, a former editor at Harper’s Bazaar , partly to keep herself busy.

Both women, while struggling with juice stains, struck on the idea of a patterned dress. They began selling the dresses at the juice stand for $22.

While Pulitzer’s first marriage did not last – she divorced Peter Pulitzer and married Enrique Rousseau, who had worked for her first husband, in 1969 – the business took off.

At first, her dresses were seen almost exclusively in Palm Beach circles, and then globally when her wealthy friends began appearing in the designs in magazines. She continued designing until 1984, when ill-timed expansions and changing fashion tastes led the firm to seek bankruptcy protection.

The label was revived in the 1990s. Although Pulitzer consulted with the company in recent years, once she retired, she threw out most of her archives and went on with her life, quite privately, in Palm Beach.

Rousseau died in 1993. According to the Palm Beach Post , Pulitzer is survived by her children from her first marriage, Liza, Minnie and Peter.