Film ‘Siege of Jadotville’ to reveal heroism of Irish troops

Shooting to begin next year in Ireland and South Africa, with Jamie Dornan in role of charismatic commander Pat Quinlan 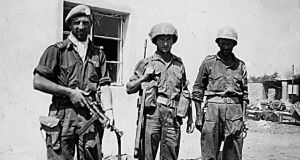 In September 1961, 150 soldiers from A Company were ordered to protect the local population. Photograph: Defence Force Archive

Nothing was ever said and there was never any official opprobrium attaching to them. But the men of A Company, 35th Battalion of the Defence Forces always felt somewhat slighted at the absence of proper recognition for what they achieved as UN soldiers in the Congo in September 1961.

Most Irish people of a certain age are familiar with Niemba and the massacre of nine Irish UN peacekeepers there in November 1960. The Congolese Baluba tribesmen who slaughtered them even entered the popular lexicon as a term of mild abuse.

But the siege of Jadotville has never assumed the place it deserves in the popular consciousness.

Change began in 2005 with the unveiling of a plaque in Custume Barracks in Athlone and this week it was announced that a full-length feature film, The Siege of Jadotville, is to be made next year, with shooting taking place in Ireland and South Africa.

Northern Ireland-born actor Jamie Dornan will play Comdt Pat Quinlan from Waterville in Co Kerry, the pipe-smoking 42-year-old commander of A Company, who led his men against extraordinary odds, under attack from Katangan tribesmen and foreign mercenaries in the Congo.

Parallel Films believes it’s on to a winner. “Jamie Dornan in uniform?” quipped one of their public relations agents. “What’s not to like?”

Quinlan was revered by his men – a hard task master but one who had their respect and, perhaps above all, their trust. The story of Quinlan and his men and what they did 53 years ago is, indeed, extraordinary.

The United Nations peacekeeping operation in the Congo was the first in which the world body sought to impose itself as a peace-enforcing military force, rather than merely acting as military observers, supervising a truce or the aftermath of a conflict.

It was also Ireland’s first UN peacekeeping operation, the Defence Forces’ first outing on the international stage since gaining independence.

On September 13th, they came under heavy attack from between 3,000 and 5,000 militia, tribesmen and mercenaries, going at them in waves of about 600 at a time and supported by a Fouga Magister training jet, fitted with machine guns and under-wing bombs.

Quinlan marshalled his men to good effect, so much so that they held out for six days. Efforts by other UN forces to come to their relief failed. At one stage, the Irish radioed UN headquarters saying: “We will hold out until our last bullet is spent. Could do with some whiskey.”

Through good, accurate shooting and well-aimed mortars, the Irish repulsed repeated attacks, knocking out enemy mortar and artillery positions, killing some 300 of their foes and wounding up to 1,000 more – all without sustaining a single fatality themselves, though five were wounded.

In the end, however, when their ammunition and water ran out, Quinlan was forced into a ceasefire and then a surrender, after which they were in effect held hostage for a month before being released.

According to military writer Declan Power – on whose book, The Siege of Jadotville, the film will be based – when eventually they returned to Athlone, Quinlan and his men were greeted with huge relief by their families and the town in general.

However, it seemed the wider Defence Forces family did not know how to deal with the situation.

Despite Quinlan’s recommendation that several of his men deserved medals, none was ever awarded. (Subsequently, three did win recognition for separate acts of bravery in the Congo: C/S Walter Hegarty and Capt Thomas Quinlan both won the Distinguished Service Medal – with distinction – for their role in the Battle of the Tunnel near Elisabethville, and Cpl William Allen won the same medal in 1962.)

“One of the legacies of it in the Defence Forces was that you were on one side or the other – those who fought, and those that were connected to them, thought they had been heroic. Quinlan’s leadership and tactics undoubtedly saved their lives.

“The greater army in general, however, ran between feeling they had been cowardly [by surrendering] to a feeling of ‘let’s forget about it, surrender is not a word we want associated with the Defence Forces on their first international foray’.

“There was a certain overly prickly defensiveness. There was nothing on paper that ever condemned them, but the incident was quietly forgotten.”

Quinlan strolled into town to buy beer for his men the day after the siege ended, wrote Power. “With his mouth firmly clenched and his eyes unblinking under his shaggy brows, he returned the gaze of each and every mercenary who tried to stare him down.”

Mary McAleese: ‘I’m a bit of an ’oul interrupter. That’s what I hope to be’
7