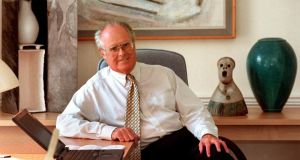 Phelim Donlon, who has died aged 78, was deeply influential in the remarkable expansion of professional Irish theatre in the closing decades of the last century and remained a much-loved mentor to many practitioners until his death.

Donlon was the epitome of old-fashioned elegance and courtesy, but the flood of tributes from the arts world on social media shows him as totally contemporary. He was still texting friends until shortly before he slipped into unconsciousness, after a challenging illness borne with exceptional fortitude. His family noted wryly that his phone gave up the ghost only just before he did.

Donlon, the eldest son of Eileen and Michael Donlon, of Drumcondra, was educated at Belvedere College. The rigour of the Jesuits was a lifelong influence on his fiercely independent mind, informed by very wide reading.

But duty often trumps personal aspirations, and he joined his family’s wine and spirit business, Donlon Bros, on Moore Street, in 1954.

When that business finally faltered, he found his real calling, becoming general manager of the Olympia Theatre in 1978.

He was sent nightly by the Olympia’s old-style impresario, Brendan Smith, to spy on sales at Jim Sheridan’s ramshackle but vibrant Project Arts Centre nearby. The experience convinced Donlon that there was no shortage of Irish dramatic talent, only a drastic shortage of finance and infrastructure. This insight would drive the rest of his career.

He became administrator of the Irish Theatre Company in 1980. Except for Galway’s Druid Theatre, Ireland outside Dublin was starved of first-class productions. The ITC fed that hunger with memorable touring productions. Again, however, Donlon was learning: regional centres were more than ready to put their own dramas on stage, but lacked the means to do so.

His position as drama officer at the Arts Council, from 1984 to 2001, enabled him to address this issue of building a national network of professionally staffed theatre companies. He did so with tireless energy and imagination. But he was never seduced by bureaucratic visions of bricks and mortar in abstraction from individual talent.

Tributes have repeatedly cited how meeting Donlon sparked lifelong careers, and how that flame would be nurtured by wise mentoring thereafter. His especial encouragement to women was legendary.

He had time for everyone who had anything to contribute. He had no time, as his daughter Lorna reminded us at his removal, for “mountebanks, hoodlums and fizzers”, in any walk of life; he could be wickedly funny about them.

After his retirement, he undertook consultancies for the Pavilion Theatre in Dún Laoghaire, where he was a board member, for Waterford International Festival of Light Opera, the Belltable Arts Centre, Offaly County Council and Udarás na Gaeilge. He was twice a judge for The Irish Times Theatre Awards.

Somehow they also found time to form a wonderful family, and Phelim was a loving and much loved father and grandfather.

His passion for music was almost as great as his devotion to theatre, and ranged from Puccini to Muddy Waters. On recent holidays with friends in Italy’s Cinque Terre, he began to accompany a resident American soprano, Julia Bonilla, in impromptu sessions in a Vernazza backpackers’ bar.

These sessions blossomed into a sell-out charity concert with Bonilla and two colleagues in that village just three years ago.

The posters described him as “il maestro Phelim Donlon”. His many friends would say they got it just about right.

He is survived by his widow, Pat, his daughters, Lorna and Sinéad, his sister Sheilagh and his brother Michael.