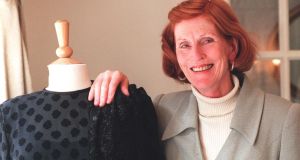 Fashion designer Pat Crowley, who died on Monday at the age of 80, will be remembered as much for her stylish clothes as her good looks and vibrant personality.

Coming in the wake of a generation of Dublin couturiers such as Raymond Kenna, Sybil Connolly and Irene Gilbert, who reinvented Irish tweed and linen in the 1950s for an international clientele, Crowley’s period working with Gilbert, arguably the most talented of the three, was central to her career.

From her she perfected technical skills of draping, consummate attention to detail and finish, but also learnt the importance of understanding the lifestyle of her clients and the needs of women “in conspicuous places”. Crowley’s experience selling Gilbert’s collection to American buyers and her ease in social circles paved the way for her own later success in the US.

Born in Taylor’s Hill, Galway, in 1933, Crowley was the eldest of the seven children of Mayo man Herbert Vernon, a Bank of Ireland agent and his wife Netta Morrissey from Charleville, Co Cork. The family moved around Ireland living in bank houses and Crowley remembered in particular their time in Banagher where her enterprising spirit and fierce independence first expressed itself when she used to roll out her pram to sell her wares.

Opportunities
On leaving school she studied fashion at the newly opened Grafton Academy of Dress Design in Dublin at the encouragement of her mother, though she would later say that her real desire had been to study architecture. After graduation she became an air hostess with Aer Lingus, then a glamorous job that offered unrivalled opportunities for travel, and flew on the first transatlantic flight.

She had to quit, however, on marriage to the businessman Conor Crowley of the accountancy firm Stokes Kennedy Crowley – as was the practice at the time. A modern woman, instead of settling down like many others during the late 1950s, she took a job working with Irene Gilbert in Dublin where she remained for eight years before setting up on her own in 1968, the year her first child, Vernon, was born.

Initially, Crowley concentrated on knitwear and was known for her fresh and youthful approach to lace and crochet at one point employing some 600 craftworkers. She co-ordinated yarns for knitting and crochet with tweeds, but from the 1970s onwards she expanded to a couture range which she sold in her Duke Street shop along with other European designers such as Valentino and Ungaro.

She dressed Mary Robinson in her signature tunic dress and three-quarter length jacket for her meeting with Queen Elizabeth in London and Pope John Paul in Rome and was particularly proud of designing the dress Marie Heaney wore when Seamus Heaney was awarded the Nobel Prize for Literature. In 1990 she received the Satzenbrau Designer of the Year award.

In the US, where she travelled regularly to New York, Dallas and Palm Beach to sell her collections, she attracted the attention of wealthy socialites such as the Vanderbilts, the Kennedys and Kitty Brady, wife of politician Nicholas Brady, treasury secretary in the Bush administration.

One of her most important customers was Mary Lou Whitney, known for her extravagant theme parties in Kentucky and Saratoga Springs for the American racing season. In 1986 Crowley created a Scarlett O’Hara number for her in silk, handpainted at NCAD with velvet ribbons slotted through 140 eyelets while another lavish dress in five different types of lace took a week to construct.

US clients also included wealthy lawyers and bankers demanding more restrained everyday wear which gave her collections a sharper direction and focus. At home in the 1990s she became known for simple, practical daywear using Irish tweed from McNutts in Donegal and small handweavers such as Lisbeth Mulcahy in Dingle as well as ultra feminine evening wear and wedding dresses.

Striking
Slim and strikingly handsome with flame red hair, she was the best advertisement for her own clothes and an astute businesswoman. Models such as Hilary Weston, Brenda Rohan and Kathleen Watkins loved working for her and she always brought a sense of fun and informality compering her own shows in her boutique in Molesworth Place and elsewhere.

Her style and instinctive ability to put things together with taste and unerring eye for colour and fabric extended to her surroundings, latterly Dolly’s Grove in Dunboyne, a 62-acre stud farm where she rode out every day. “Whether she was designing clothes, riding horses or on the ski slopes, she was always full of courage,” says Ib Jorgensen, friend and fellow couturier.

In 1999 she underwent a hip operation, was later diagnosed with Alzheimer’s disease and had to face the sudden death of her husband, Conor.

A year later she decided to retire, closed the doors of her boutique and Dolly’s Grove was sold. Her daughters, Fiona and Lisa, remember an innately elegant, energetic mother with a driving force and hunger for life who, “true to form, always did what she wanted”.

She is survived by her three children, Vernon, Fiona and Lisa, her sister Betty, brothers John, Billy, Robbie and Raymond and three grandchildren.