Eva Orsmond: ‘Young women have no reason to be overweight’

The weight-loss expert, known for her sharp tongue from her time on RTÉ’s ‘Operation Transformation’, says Irish GPs are letting their overweight patients down 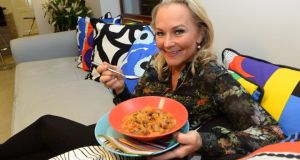 It’s nearly too perfect that Eva Orsmond has a Rottweiler and a Doberman. It would have been a surprise if the most fearsome doctor on our TV screens had a toy poodle or a Labrador lolloping around her Co Wicklow home. “They’re excellent security out here in the country,” says Orsmond, whose husband has been away a lot. They are company when she goes for a run on Newcastle beach too.

Not that she has had much time for running lately. She has five weight-loss Orsmond Clinics and she is just back from a month in Australia, where she met up with her husband, South African-born Wyatt, who was on the tail-end of a four and a half month sailing trip. Then there is her new diet book to promote.

The Finnish-born medic became famous over the course of her six years on Operation Transformation, RTÉ’s ratings-grabbing, fat-busting show. It took a while for audiences to get used to a doctor dishing out recipes, and to her frank approach and, because every reality show needs a baddie, she soon became a star. She was a rare thing: a TV personality with a distinctive personality.

But then her sharp tongue tripped her up. She made one of the contestants cry by telling her to “cop on and stop crying”, and she went from the being the one some viewers loved to hate to someone they were turned off by. So is she just a little chastened by the public reaction?

“Would I talk to anyone like that in my surgery? No, of course not – but don’t get me wrong, it didn’t come difficult to me,” she says. Orsmond has been replaced for this series by a GP and a nutritionist (who, incidentally, made a contestant cry last week, although there were no calls to Liveline or complaints to the Medical Council afterwards). Might the reaction to Orsmond have stemmed from how she said things rather than what she said?

“I am loud,” she says – and she is, even sitting around the island unit in her smart new kitchen. Although maybe that misses the point that it was the tone rather than the decibel level that was the problem.

Hollywood touch
The show made her a celebrity. “I love [being a celebrity], because when I arrived here I knew nobody,” she says.

Indeed, our interview kicks off with an odd celebrity-type moment, when Orsmond’s manager sits down at my elbow – a real Hollywood touch, as A-listers routinely have their “people” sit in on interviews. When asked, she moves to the nearby sofa. Dogs for security are one thing, but Orsmond doesn’t come across as someone who needs a minder.

After a difficult year, the round of publicity for her new book, Dr Eva Orsmond’s 10lb Diet, is affirming. “I felt like crying the last week because I feel I got so much love,” she says. And she’s game. She did a glamorous fashion shoot for a Sunday newspaper to plug the book. “I love clothes. Doctors shouldn’t do that? I am a doctor with my patients, but if I am asked, at my age, to do a photo shoot, I grab it with both hands.

“It’s self-confidence,” she says warming to the theme. “Is there something wrong with having fun? I’m good-looking for my age. I actually work hard. I have the energy of a 27-year-old.”

And will she reveal her age? “Absolutely not. You must be joking.”

The couple have two boys: Evan, who is spending his transition year in France; and Christopher, who is doing his Leaving Cert. When the family arrived here in 2000, they did so because of Wyatt’s job as a geotechnical engineer working on motorway building projects.

When studying medicine in Finland, Orsmond’s dream had been to be a plastic surgeon, but when she came here she considered becoming a GP.

She was offered work in a GP practice in Shankill, south Co Dublin, and she went as far as discussing terms before realising it wasn’t for her. Weight loss was her real interest, and so she started her first clinic.

She has a low opinion of GPs when it comes to weight issues. Being overweight, she says, is a contributing cause to high cholesterol, high blood pressure, fertility problems, diabetes and even cancer. So she is mystified that doctors don’t routinely weigh patients, “even if the patient is there for a sore throat”, and if necessary tell them to lose weight.

“Doctors are almost throwing the drugs to patients instead of saying: hang on.”

She barks “hang on” in such a terrifying way I challenge any patient not to swear off carbs for life.

She acknowledges that some patients might not take too kindly to even a doctor telling them they are overweight. “There are patients who would say, ‘How dare you?’” she says.

Orsmond has seen that happen even in her own clinic, which people attend specifically because they are overweight. “People in Ireland are concerned about people’s feelings. Maybe it’s not taken well if I say something straight, that someone’s feelings are hurt but I feel that sometimes you have to be a little unkind to wake up the person.”

Doctors, she says, should be role models when it comes to weight. “I can’t be telling people what to do and then be overweight. Absolutely not. It needs to start with doctors. They should be the example.”

Orsmond is passionate about her subject. She can list off calorie counts, statistics from current studies in obesity, the rate fat is burned off through various forms of exercise and the impact of excess weight when it comes to developing a range of medical conditions.

While she acknowledges that some people become overweight due to, for example, psychological difficulties, she says crisply that “young women have absolutely no reason to be overweight. Many people choose to eat crap and smoke.”

It’s a cost issue too, she says. “The State could save €140 million annually if just 10 per cent of people with Type 2 diabetes reversed their condition through a strict weight-loss programme,” she claims.

New book
Her new book – her second – is a clever idea. There can’t be many people, especially after a Christmas blow-out, who don’t want to shift what sounds like a relatively achievable wodge of fat. “Ten makes a huge difference,” she says. “Now, in fairness, if you are obese, 10lb? You would hardly feel it.”

It’s just the sort of directness you expect from her: bigging up her book and being brutally honest about it in the space of a sentence. It’s a particularly smart-looking publication, with beautiful photographs taken in her house featuring plates and bowls she brought back from Finland.

Some of the recipes are more what you would find in a Nordic-inspired cookbook rather than an austere diet book. There’s vispipuuro, a Finnish whipped porridge (147 calories); siskonmakkarakeitto, a pork sausage soup (306 calories) and kiisseli, her “great grandma’s berry soup” (147 calories).

Does she really think people will cook scrambled egg with caviar for breakfast? “Of course! You can get the caviar in Ikea. ”