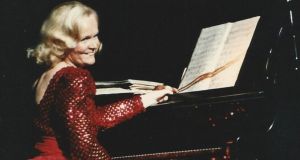 Eily may be best remembered by some as wife of the great Irish tenor Frank Patterson. If so, she would be quite happy about that. From the moment Eily met Frank she devoted herself to furthering and promoting his career. Together they had spectacular success.

However, there was a great deal more to Eily than a devoted wife to Frank and a devoted mother to her son Éanán.

Eily was an outstanding musician in her own right. She studied piano with Elizabeth Huban in Dublin and later with Carlo Zecchi in Rome. She also studied Irish harp with Nancy Calthorpe. She was a multiple prize-winner at the feis ceoil in Dublin and gave numerous recitals with her O’Grady sisters.

The big turning point in Eily’s life and career came in 1966 when she was asked to be musical director of a group of Irish singers and dancers under the name Feis Éireann. This group toured the length and breadth of America – and the tenor soloist was Frank Patterson. Eily and Frank fell in love and became inseparable. They were married in 1967 and from there on Frank’s career was paramount.

However, Eily was never just “the wind beneath his wings ”. They settled in New York and, apart from organising, promoting and producing their concerts and accompanying Frank on stage, Eily found time to teach piano and particularly the Irish harp to young people of Irish descent in the New York area.

Eily’s Harp Ensemble appeared with her on the stage of Carnegie Hall and Radio City Music Hall and many other venues throughout the US.

Frank died in 2000 but Eily continued to have a huge impact on the cultural scene in New York.

Her achievements were recognised by a number of awards, including an honorary doctorate from Salve Regina University, Newport, Rhode Island.

She was also named Outstanding Irishwoman of the Year by the Irish-American Historical Society of New York.

Eily was a multi-talented person, warm-hearted and generous to a fault. Her hospitality was legendary. The Patterson house in New York became a “home from home” for Irish relatives and friends, all of whom will remember Eily with love and gratitude.

She is survived by her son Éanán, now a successful composer, her sisters Geraldine, Moya and Sheila, and was predeceased in 1986 by her brother Seán.