Coping: Ancient philosophers tips on how to keep your resolutions 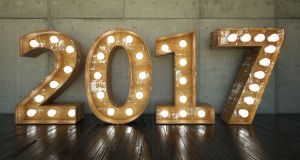 This is a new year to take charge of your life and embrace the frightening changes you might have been putting off.

I have always found New Year’s Eve, and the days that flank it, a little bit depressing. Rather than looking forward to a new year, I’ll fixate on people and things lost, or achievements not yet reached, and feel rather glum. As pessimists will attest, the passing away of the old year into the new can quickly start to look like another year in which you’ve failed to shrug off the serpentine skin of bad habits. They weigh down upon you, stunting the potential growth of good, new habits. Sadly, medicating this condition with an eighth mince pie doesn’t work. We’ve all tried that. Instead, this year we could keep the advice of three great thinkers in mind, and bolster ourselves with it as we stumble into the new year with some sense of positivity.

Bin the fancy new self-help book you got for Christmas. Around 1887, the philosopher and psychologist William James wrote a rather short treatise – called Habit – which builds on Plato’s famous idea that our character or personality is a conglomeration of “what we repeatedly do”. James has three straightforward points of advice on successfully forming good habits.

First, “ . . . accumulate all the possible circumstances which shall reinforce the right motives; put yourself assiduously in conditions that encourage the new way; make engagements incompatible with the old; take a public pledge, if the case allows; in short, envelop your resolution with every aid you know.” Second, “ . . . never suffer an exception to occur till the new habit is securely rooted in your life. Each lapse is like the letting fall of a ball of string which one is carefully winding up; a single slip undoes more than a great many turns will wind again.” Thirdly, he advises us to take every opportunity to act out the habit that arises as we go about the day. According to James, this is the only way to solidify a new habit into a behaviour; in other words, to make it part of who we are. He was brother to the novelist Henry James and diarist Alice James, so we can trust that he came from a family that understood the formation of productive habits.

Take pleasure in the small things

Epicurus is frequently misunderstood in the modern era as some sort of thrill-seeking hedonist, which couldn’t be more inaccurate. Rather, he perpetually sought ‘ataraxia’, a state of supreme serenity, and thought the best way to do so was by finding contentment in the small, constructive pleasures of everyday life. By Epicurus’ definition, pleasure was to be found in friends and family and in the wholesome pleasure of a healthy meal rather than in base or elaborate pleasures like rich foods, drunken carousing or sex. In the anxiety of life, it is easy to forget to take note of the fulfilment in a moment of connection with a good friend, or the earnest, sweetly lisped conversation of a small child. Smaller, personal pleasures are not necessarily endorsed as desirable by wider society –where owning a Porsche is deemed more meaningful than half an hour with a good book by the fire – but they are not objectively less valuable for all that.

Accept there is no perfect time to do anything

Kierkegaard appears to have been what you might describe as a bit of a drip, but his ideas are very useful. He notes, glumly and probably with excellent hair and an attractively pained expression, that we expend much of our energy in hope and expectation, ultimately becoming absent to ourselves in the present. Obviously, life changes should be made as responsibly as possible. It’s best to choose a spouse carefully and to put off having children or changing career until you can afford to do it. However, sometimes it’s important not to let another year pass without doing something you want to do just because the timing isn’t ideal. Sometimes, there is no ideal time. This is a new year to take charge of your life and embrace the frightening changes you might have been putting off out of over-attachment to the past, or fear of the future. If it doesn’t work out, you can always join Epicurus in seeking ataraxia in the new year.