Church of Ireland priest who championed gay rights and ecumenism 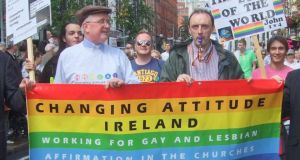 Mervyn Kingston (left) at the 2010 Belfast Pride Parade with his partner, Richard O’Leary.

Until ill-health forced his retirement in 2007, he was rector of Creggan, Ballymascanlon and Rathcor, parishes that cover much of north Louth and south Armagh. He took his ministry into the heart of the community, immersing himself in its development.

One of his major achievements was to secure European Union funding to transform the land around Creggan Parish Church, near Crossmaglen, into a public park. With others, he organised the building of a visitor centre at the church to showcase the area’s social and religious history. To further this, he produced a DVD of three short films titled The Poetry and Music of the Fews.

He trained as a tour guide so that he could show visitors around the graveyard at Creggan Church, where several 18th-century Irish poets are buried. He developed a love of the Irish language, often saying the Lord’s Prayer as Gaeilge.

He took stances which made both Church of Ireland members and republicans uneasy. He engaged with Sinn Féin representatives and questioned the continued large-scale military presence in south Armagh after the ceasefires. When the IRA murdered Co Louth farmer Tom Oliver in 1991 for allegedly informing, he helped organise community protests.

His importance extended beyond Church circles. A challenge he made to the Department of Social and Family Affairs was a significant victory for gay people. Seven years ago the Department agreed to pay adult dependent allowance to his partner, who had taken unpaid leave from work to care for him. The Department initially refused to pay: Kingston appealed to the Equality Tribunal, and the Government overturned the refusal.

Niall Crowley, chief executive of the Equality Authority, said the outcome reflected “an important recognition for same-sex couples and their relationships”.

Ecumenical
As a man who instinctively reached out to others, Kingston was ecumenical. From 1984 to 1990 he was bishop’s curate of the strongly loyalist Glencairn parish in west Belfast. There he invited a priest friend to his installation. Later, he invited a nun to preach to the congregation.

Compassion was part of his nature. He blessed second relationships for Catholics who were unable to get such recognition from their own Church.

George Mervyn Kingston was born in August 1947, with his twin sister Jill, in East Belfast. His father, George Kingston, was a fitter and a native of Co Cork who had moved to the North in the 1920s. His mother, Sheila (née Halliday) was from Tyrone. He was educated at Nettlefield Primary School, then Grosvenor Grammar School.

After finishing school, he went to work for the Department of Health and Social Services. For a time he was responsible for deciding the eligibility of claims for supplementary benefit in West Belfast – earning the nickname ‘Santa Claus’ for his generosity. However, he felt the call of the Church and was ordained in 1974.

He is survived by his partner, Richard O’Leary, his sister, Jill, and family circle.