Being a male model is ‘not a glamorous life. It’s super lonely’

Dubliner Sam Homan, one of Ireland’s most successful male models, is frank about the dark side of the industry, the insecurities, the eating disorders, and his desire to get out 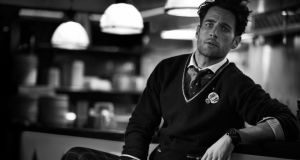 Sam Homan: ‘If I had a kid I wouldn’t let them model. Especially a girl. No f***ing way’ 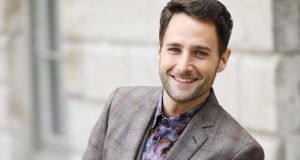 Sam Homan swashbuckles on stage, slivers his mouth into a smile and lowers those lashy, mint-blue eyes on to the audience. We’re at the Arnotts autumn- winter show.

He’s not a natural on the catwalk, seeming to shuffle his legs and rush though his poses. But, says Sarah Williams, head of PR at Arnotts, “he’s a phenomenal look. Very self-assured and very versatile.” He also bakes. At 7am he produced almond and sesame rolls backstage. A recipe columnist with German magazine MM, baking is his passion and his back-up plan. It has been with him for more than five years in the brutal industry of international modelling.

“Ireland’s very good. There’s no bulls**t. It’s a very PC model industry. It feels like it’s sugar-coated compared to the world,” says Homan when we sit inside his agency, Morgan. He wears a purple tie-dye T-shirt and Afghan scarf, and his arms are crawling with tattoos.

He is Ireland’s most successful international male model along with Eider Leite, also in the Arnotts show. But at 6ft, with “classic” looks, Homan knows he is a “commercial boy”, a brand ambassador not a steep-jawed creature of high-fashion like Sean O’Pry, the world’s top-earning male model. “We are a product: clothes hangers. There’s always someone who will replace you,” he says.

Homan, a culinary arts dropout, turns 30 next week. He has been modelling since he was 22. He is home for the summer from New York, and staying with his parents in Rathfarnham. He is mirthlessly hilarious when describing what he does. He is signed up with seven different agencies internationally, and he moves countries every few months. He stays in model apartments, which are not penthouses.

“It’s always bunk beds or three beds to a room, because the agencies want to get the most money out of the models. They don’t care,” he says. For six months in New York he lived with 14 other men in a five-room apartment, four in his room. Rent was $1,000 per month each for the assortment of messy, spoilt 17- to 30-year-olds, who didn’t wash up.

“It’s not a glamorous life. It’s super lonely. You make lots of acquaintances and no friends,” he says. He has learned to be resilient within a poisonous tank of competition. “You go to a casting, there’s 1,000 people. You get your number: 274.” He might queue for an hour, present his book and be witheringly dismissed. “I say, ‘Look, you can say no. Because seriously, I have four more castings today I need to get to.’ I’m like, ‘You’re wasting my time as much as I’m wasting your time’.”

Commercial modelling is hand-to-mouth. Homan believes 70 per cent of models make less than minimum wage when they add up their erratic earnings each year. Male models also earn less than females, according to Payscale.com, because they don’t sell brands like women do. They have to aim high.

His versatility has taken him on leaps between Dunhill cigarettes, Gant by Michael Bastian, McDonald’s and Berocca. In London, where he is signed with Premiere, his daily rate is £1,500; in New York, with Red, it’s $1,000. In Dublin it’s €250 for a photo call, one clue to his working internationally in a world he loathes.

“I’m doing a job that is basically 98 per cent rejection and 2 per cent success. If you have any bit of insecurities, you’re f***ed,” he says.

Everybody has them, so what are Homan’s? “At 19, I was 17 stone. Now I’m 12 stone. I lost a lot of weight.” From his phone he pulls up a picture of a much bigger boy. “I used to get bullied for being fat. I remember being brought to Weight Watchers by my ma, being super embarrassed. Obviously, I still have hang-ups about my weight.”

At once stage, he became “obsessed”, ate only chicken and broccoli and worked out twice a day. He swipes to a picture of himself with skeletal ribs, and glances down at his now healthy frame. “Now I’m really happy with my body. It comes with age.” He diets and goes to the gym six days a week.

Several of his acquaintances have eating disorders. “You have all these kids who literally don’t eat. They’re skin and bone. They wake up and go, ‘Oh my God, I’m so fat, I’m not eating today’.”

Male models, he says, have the same anxieties women do, only they are harder on each other.

“The other guys are bitchy. They’re like, ‘Your face looks a bit bloated this morning’.”

He doesn’t allow agents to weigh him, because they might do so weekly. “Paris is the worst, that’s why I refused to go to Paris – they’ll literally measure your calves against your wrists, and if they don’t fit, you’re sent home. It’s a f***ing weird industry.”

In a barrage of very Dublin banter, Homan portrays a vicious, depraved demi-monde in which casual harassment by a world-famous fashion photographer is taken lightly.

So why does he do it? He likes some of the people. More interestingly, he is a pastry chef and devoted cook, and he wants to open a bakery in Dublin. He is excited by food. “I’ve been to South Korea, Athens, New York, Milan. When I go there I always check out the food. I was in South Korea for nine weeks, hated every minute of it [but] I found my most favourite food there. I always try and replicate what I’ve tried.” He’s been making kimchi pickles and Korean desserts.

For his 30th birthday next week, sweet-toothed Homan will have 30 Dublin friends to his house for 17 courses, including suckling pig, cinnamon balls, chocolate bowls and mini cheesecakes. He will continue working on his business plans for a bakery and devising recipes for magazines. He blogs at samuelhoman5. wordpress.com. He’s single, waiting for the right girl to settle down with. “If I had a kid I wouldn’t let them model. Especially a girl. No f***ing way,” he says.