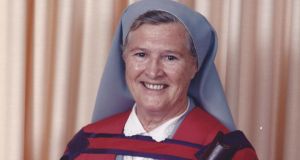 Sr Ann Ward, who has died aged 87, was a pioneer obstetrician and a missionary nun. Her surgical speciality was the repair of the damage to young women caused by becoming pregnant before their bodies were fully formed.

Her work at St Luke’s hospital in Anua, Nigeria, and at a specialist unit for obstetric fistula repair she established at Itam, was recognised internationally by her peers.

Fistulae, as the condition is known, are relatively common in countries such as Nigeria and Ethiopia. They commonly result from prolonged labour in first pregnancies in places where there is little or no medical care.

The bladder and surrounding structures become damaged or torn. As a result, urine flows freely. Infection accompanied by a bad smell ensues. Sometimes the baby lives, sometimes it dies. The affected woman, with or without her baby, is rejected by her husband.

Ward developed a simplified surgical approach to fistulae, and coupled it with intense care in pre-operative preparation and post-operative care. She repaired more than 2,000 of such devastating pelvic injuries, working late into the night under primitive conditions.

Many more young women were operated on by fellow obstetricians who flew in from Europe, at Ward’s request, at the “camps” she set up for this purpose. These “visiting firemen” learned from Ward’s improved procedures, and thus benefited the wider community of women with obstructed pregnancies.

Surgical success was only the beginning. Ward knew that her young patients needed friendship and support – not pity – which had been their lot previously.

“The arch-enemy of compassion is pity,” she insisted. “Pity puts distance between you and the person you are pitying. Compassion puts the two of you on the same level, enabling you to work together to change the situation, or at least to make it more bearable.”

Ward worked in southeast Nigeria from 1959 to 2006, when failing health forced her retirement to the Medical Missionaries of Mary headquarters at Drogheda, Co Louth.

Much though she valued her male colleagues, she wanted more women to become obstetricians.

“There are many women who can only confide their deepest and most sensitive feelings to another woman, who they feel will understand their emotions,” she said when receiving an award from the International Federation of Gynaecology and Obstetrics in Copenhagen in 1977.

Other honours included the Distinguished Graduate’s Award from UCD. Unicef in Nigeria granted an award for her outstanding work in mother and child health. She was awarded an honorary Fellowship of the Royal College of Surgeons in Ireland in 2004. After her death her family and fellow nuns found other prestigious awards of which they had known nothing.

Ann Ward was the youngest of three children of Peter (PJ) Ward, a solicitor who represented South Donegal in the first Dáil. She attended primary school in Raphoe.

Her mother Molly (Ritchie) from Ballinrobe, Co Mayo, took her youngest child to Dublin one day to sing for her friend the opera singer Margaret Burke Sheridan. Her mother later left husband and children and went to London. The three Ward children were then raised by their father and his sisters.

Following post-graduate study at the Hammersmith Hospital in London, she became a member and later a fellow of the Royal College of Obstetrics and Gynaecology.

In Nigeria, London and Dublin, she was a doctor and a nun, but back in Donegal for holidays every second year she was a sister, an aunt, a cousin, a neighbour. Not a touchy-feely woman – “Wards don’t hug – she chided an over- demonstrative niece – but a dynamo of blue-eyed energy.

She borrowed a souped-up Ford Capri from a cousin and took to the highways and byways of her home county with the fearless aplomb of a Lagos taxi driver. Her take on the game of golf depended more on strength than accuracy, as befitted a veteran of the Moynagh trophy, held annually in Calabar, Nigeria. The little girl who sang for Margaret Burke Sheridan grew up with a fine soprano voice and took little prompting to sing The Hills of Donegal. During her recent prolonged illness, one of her greatest joys was a visit from Daniel O’Donnell.