A Walk for the Weekend: A grand parade around Spike Island

The former naval base, barracks and young offenders’ prison is now a tourist attraction 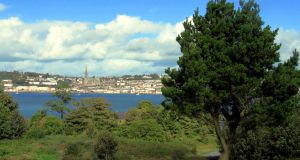 The town of Cobh, seen from Spike Island, Co Cork

“Upon no other island on the Irish Coast have so many eyes rested or so few persons voluntarily set foot.”

Thus wrote James Coleman in his book The Story of Spike Island, which was published in 1893. With such an intriguing statement, this is an island which begs to be explored.

Its history makes it unique among Irish islands in the variety of its uses over time. Starting as a monastic settlement in the seventh century, it has in turn been a smugglers’ lair, a British army barracks, a depot for convicts awaiting deportation to Australia, an Irish Army barracks, a military detention centre, an Irish naval base, a prison for young offenders – mainly “joyriders” – and finally a tourist attraction under the care of Cork County Council.

At the core of the island is Fort Mitchel, formerly Fort Westmoreland; it is named after John Mitchel, who wrote the Jail Journal and who was incarcerated here prior to his deportation. The road to the entrance passes through part of a deserted village. There was a thriving community on the island for many years but they were resettled on the mainland after a riot by the “young offenders” in 1985. It is sobering to see the rapidity with which dereliction has set in; it looks like it could have been abandoned 100 years previously.

The walkway is liberally endowed with information panels and benches on which to sit and soak up the beauty of this large harbour. It was so enjoyable I completed two laps and diverted from a third to drop down and visit the convicts’ graveyard, and then I walked along the shoreline past more of the derelict houses until it was time to catch the ferry back to Cobh.

Map: Ordnance Survey, Discovery Series, sheet 81 and 87, but they are not necessary.

How to get there: Follow the N 25 east from Cork and take the exit for Cobh. Alternatively, you can take the train from Cork City. For times and dates check spikeislandcork.ie

Distance: 2 to 4km. You can take the route in any order you wish.