Our wedding story: from Norway with love 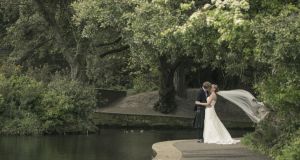 Railroad engineer Birger Slyngstad (35) and Janne Nydal (31), a preschool teacher, who are both from Norway, were married in Dublin on May 17th, their country’s national day.

After meeting at a New Year’s Eve party in 2010, the couple’s first weekend away together was to Dublin.

“We loved the people, the city and everything about it,” said Janne. “At Shelbourne Park we agreed that if we ever got married, it would definitely be in Dublin.”

After a two-day quiz and treasure hunt that ended up with Birger wrapped in a red bow, he went down on one knee in 2014. The Norwegian couple had met an Irish couple in India during a seven-month backpacking trip. So they stayed with them while visiting potential wedding venues here. They settled on Clontarf Castle for their wedding reception.

On May 17th they were married by minister Mary Losty, a minister of the Spiritualist Union of Ireland.

Twenty-eight family members and friends, including best man Kaare Wiik and maid of honour Stine Nord Djuvik, travelled to Dublin on the same flight and spent the eve of the wedding at Shelbourne Park – exactly four years after Birger’s and Janne’s first visit.

They walked into the ceremony to Shania Twain’s From This Moment, walked out to I’m a Believer by Smash Mouth and their first dance was to My First, My Last, My Everything by Barry White.

“It was definitely hard planning a wedding in another country,” said Janne.

“But no matter who we spoke to in Ireland they were more than helpful. So it was absolutely worth it. We just love Ireland.”

Birger and Janne live in Aalesund, Norway, where they have just bought their first house. They will travel to the US for their honeymoon in October.