New funeral customs – and old ones that are returning 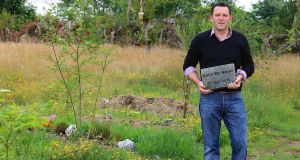 The gap between death and burial is widening: “That would be the one thing I think we’ve done wrong traditionally,” says Séamas Griffin of Kirwans Funeral Directors. “We get it over with too quickly. That’s changing, largely because of emigration. Now people often have to wait until a son or daughter gets home.”

– Coffinless burials: Traditionally, Muslims are buried without coffins; the law in Ireland was recently changed to facilitate this. Coffinless burials also appeal to people for ecological and financial reasons.

– Filling the grave in the presence of mourners: “If [the family] want us to do it, we backfill the grave while [the funeral party] is still there,” says Colin McAteer of Green Coffins Ireland. “That’s the old way of doing it. It brings a sense of completion.”

– Having a funeral celebration after the burial: There aren’t always very many locations available for a nonreligious funeral ceremony with a coffin, so humanist funerals sometimes reverse the traditional order of things. “We sometimes go to the graveyard first and bury the person with a few short words by the graveside before going to a hotel for a ceremony,” says Brian Whiteside of the Humanist Society of Ireland.

– QR codes for headstones: Online memorials are becoming popular. Some businesses will embed a digital QR code on a loved one’s gravestone (above), so that visitors can scan it with a smartphone and access a memorial page or video.

– Black bouncy castles: A Galway business rents out black bouncy castles for funerals. “In the Celtic Tiger, we did get a bit more out there and flamboyant,” says Griffin with a sigh. “Reality TV has a lot to answer for.”

– Professional mourners: Historically, Irish funerals were attended by keening women, who went from funeral to funeral weeping theatrically. Rent-a-Mourner, a UK business, caters for people who want a good show at their funeral.

Generation panic: why is there so much anxiety among millennials?
4

If exercise came in the form of pills, we’d be queueing up for them
Real news has value SUBSCRIBE