Toyota to share its fuel cell patents for free

Car giant is going to make about 5,680 patents related to fuel cell technology available royalty-free through 2020 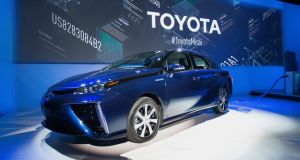 Toyota is going to make about 5,680 patents related to fuel cell technology available royalty-free through 2020.

Senior Vice President Bob Carter of Toyota Motor Sales told the Consumer Electronics Show in Las Vegas yesterday that the company is making the patents available to “speed the development of new technologies and move into the future of mobility more quickly, effectively and economically.”

This is the first time the Japanese carmaker has released patents to competitors without charging a royalty fee, underscoring the challenges Toyota and other rivals face in furthering the mass adoption of fuel-cell technology.

Fuel-cell vehicles, or FCVs, run on electricity generated by combining hydrogen with oxygen, with only water vapour created as a byproduct.

Toyota’s decision comes ahead of the launch of its new fuel-cell saloon in the US and Europe later this year - though not in Ireland as we have no hydrogen filling stations. Global production volume is expected to rise to tens of thousands by the 2020s.

Toyota’s proposal follows a June 2014 announcement by Tesla Motors boss Elon Musk that it was willing to share its electric-car patents. The Toyota patents will be made available to automakers who produce and sell fuel-cell vehicles, as well as fuel-cell parts suppliers and energy companies that will establish and operate fueling stations.

The offer also covers companies working on fuel-cell buses and such industrial equipment as forklifts, according to a company statement.

Will restaurants reopen or stay shut after lockdown?
Real news has value SUBSCRIBE