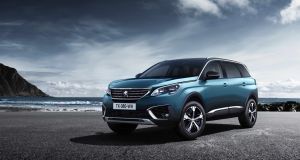 Peugeot has replaced its current 5008 people carrier (MPV) with an SUV seven-seater aiming to compete with the likes of the new Skoda Kodiaq and the Hyundai Santa Fe.

Peugeot has sprung something of a surprise by showing the replacement for the 5008 people carrier (MPV) a couple of weeks before it’s due to be launched at the Paris motor show. Except it’s not an MPV this time around at all, but an SUV – a big, square-shouldered seven-seater set to compete with the likes of the new Skoda Kodiaq and the Hyundai Santa Fe.

The 5008 shares a clear visual similarity with the recently-launched new 3008 crossover – their faces are all but indistinguishable and they share the same gently muscular lines over their wheel arches. The 5008 is bigger though – 190mm longer than the 3008, and 110mm longer even than the old 5008 MPV.

Inside there are the expected seven seats and all of the rear ones are individual seats, so there’ll be no problem fitting in child-safety seats.

Fold down the third-row seats in the boot and Peugeot claims that the 5008 has the biggest luggage capacity in its class, at 1,060 litres. We presume that means loading it to the roof though, and not the space under the luggage cover.

Up front, the 5008 shares with the 3008 the new i-Cockpit layout, which takes the small-wheel, high-instruments layout of the current 308 and 208 and adds to it an Audi-style high-definition TFT screen for the instruments and a central touchscreen for the infotainment system which is augmented by a row of toggle-style physical buttons to help you get fast access to commonly-used functions.

The engine range will kick off with the 130hp 1.2-litre turbo petrol PureTech three-cylinder engine and the 120hp 1.6-litre BlueHDI diesel and Peugeot is claiming some very low Co2 figures for both models – 117g/km for the petrol and 108g/km for the diesel, significantly lower than most of the competition.

There’s even a little fuel-saving device tucked away in the boot – the new eFO1 folding electric bicycle. Peugeot of course is something of a bike expert, and actually created its first folding bike, for the French army in 1892.

The eFO1 uses a rechargeable lithium battery and a small electric motor to give you a total range of around 30km with a top speed of 20km. Don’t worry, there are normal pedals and a chain too, and the whole thing folds up to slot into the 5008’s boot where it can recharge until you need it to whizz from the car park to your office.

The 5008 will go on sale early next year, and will be available in two mainstream versions (Active, Allure) plus GT Line and GT versions.

Hyundai i20: Korean overtakes several rivals in the supermini race