Opel Mokka-e: Easy to drive, easy to live with, and a change from cookie-cutter blandness 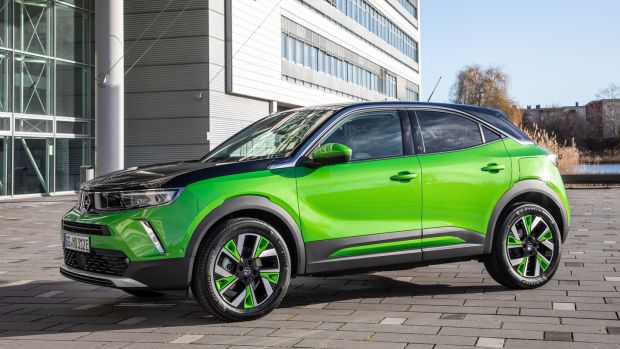 The Opel Mokka’s eye-bleeding green colour is not for everyone but I guess when you want to draw attention to a major change, discretion isn’t on the cards

Opel’s Mokka in matcha can certainly divide a car park. Having spent last week in the sleek Audi e-Tron GT, I was getting used to people pointing and gawking. This week they were still pointing, but quite a few seemed to be guffawing.

The eye-bleeding green is not for everyone, and certainly not the only one on offer – there’s a lovely red and a discrete grey on offer as well – but I guess when you want to draw attention to a major change, discretion isn’t on the cards.

And the Mokka has certainly changed. In its second generation, the new car has, thankfully, nothing in common with previous forgettable crossover that bore this name. This one has chutzpah. What’s more, it’s now offered as an all-electric option as well.

First to the looks and Opel deserves credit for embracing retro 1970s styling touches. In a segment of the market where you can barely tell one model from the next if it wasn’t for the badge, the Mokka tries to bring a little character to the mix. Certainly in side profile it’s not that different from the rest, but features like the so-called visor grille – which isn’t really a grille at all – adds a touch of 1970s muscle car styling to the mix. For a mid-sized family crossover it’s got surprising menace.

Inside, Opel has been equally bold. A bank of two screens greets the driver. When the car is off it’s like being in an amusement arcade during a power cut. These admittedly tough-looking screens are surrounded by hard carbon-fibre-style plastics and a minimal number of buttons. Turn things on and the screens come to life, but even then there’s a lack of drama to the graphics.

First impressions are of a car interior that’s pre-production, but over a few days I started to warm to the Mokka’s interior, as with the exterior styling (even the green paint). The cabin is spacious up front, the seats surprisingly comfortable, while there is space in the back for three children with decent legroom, although the headroom can be tight. Boot space is also compromised compared with rivals, smaller than offered by the likes of the Peugeot 2008, for example.

Mention of the Peugeot is appropriate, for it is the Mokka’s twin within the Stellantis group. Both are built on the same platform and share the same power options. The most evident difference is that the Opel has opted for brasher styling, while the Pug is a little more practical – and, dare we say, premium.

Along with a choice of petrol or diesel engines, both cars also come with electric-only versions, featuring a 136hp electric motor powered from a 50kWh battery pack. On this Mokka, it delivers an official range of 324km from a full charge, a top speed of 150km/h and a 0-100km/h time of 8.7 seconds.

That last figure was a bit surprising, as the styling suggests this would be one of the racier crossovers out there, but in fact it’s relatively sedate. That sense of ease is also reflected in its driving style. Apologies for harping on about the Peugeot 2008-e, but it’s an interesting comparison to make, considering both teams of engineers had the same ingredients. The French cooked up a smart-looking car with a sporty driving style, while the Germans created a more distinctive, muscular crossover with more traditional driving dynamics.

An obvious difference between the two is with the steering: the Pug’s smaller steering wheel delivers a greater sense of driver engagement, darting into bends and directing the car with more pinpoint accuracy. The Mokka, in contrast, is more in keeping with the mainstream, comfortable and confident cars already out there. That sense is matched by the ride, which is well-damped if a little firm. Of the two, the Pug seems marginally more fun to drive, but the Mokka would perhaps be more comfortable and sedate for everyday motoring or longer drives, if the range was up to it.

On the range, 324km seems a little ambitious and will really depend on your driving style and conditions. Opel has a useful little tool on its website that allows you to check your daily range by choosing between your driving style, speed and outside temperature to gauge what sort of range you can expect.

There is a choice of three driving modes in the Mokka, the eco clearly being the one to maximise range, while the Sport mode increases throttle response, but in truth this is no hot hatch, so best to opt for eco.

In summary, while the price may lure you to make the leap to electric, if you are someone who consistently does longer journeys or spends most of their time on the motorway, this is probably not the electric car for you.

Priced from €33,038, the Mokka isn’t the bargain entry electric offering, but neither is it a massive leap from the petrol alternative. In SRi grade, the difference between a 1.2-litre six-speed manual Mokka and this all-electric one is €6,743 and €4,243 from the 1.2-litre with automatic transmission.

In terms of competitors, the 2008-e starts at €31,997 and delivers a similar range between charges, while the impressive Hyundai Kona electric offers 449km but at a price starting from €38,301. In general, the more range you get the more you have to pay.

Overall, the Mokka is an impressive and relatively retro cool-looking crossover. Opel has done a good job of rebelling against the cookie-cutter blandness of the crossover segment, while delivering a car that’s easy to drive and relatively easy to live with. And when you look at that price, you start to see how some folks who are tempted to make the move to electric may well consider the Mokka as the car to choose.