Prices for the new generation Countryman start at €33,850 on the road 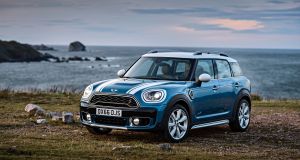 Mini has confirmed new pricing for its Mini Countryman, starting at €33,580 on the road

Mini has confirmed new pricing for its Mini Countryman, starting at €33,580 on the road. The first cars are due to arrive in Ireland in February. Amongst the line-up for the five-seater family-sized Mini will be a new plug-in hybrid version.

The new hybrid features a turbocharged petrol engine and an electric motor, reducing fuel consumption to 2.1 litres per 100 kilometres, while its CO2 emissions figure is 49 grams per kilometre yet also enabling a 0-100 km/h in just 7.2 seconds. The lithium-ion battery is positioned directly in front of the electric motor underneath the rear seat. It claims a 40km range on electric power alone. Prices for the plug-in hybrid model have yet to be confirmed.

As for the rest of the range, it comprises a 1.5-litre three-cylinder 136bhp petrol, a 192bhp 2-litre in the Cooper S, and a 2-litre diesel with 150bhp or 190bhp. The Countryman will come with either manual or Steptronic gearboxes and with front- and all-wheel drive.

Coronavirus: Irishwoman in Cayman Islands on living under 24-hour lockdown
6