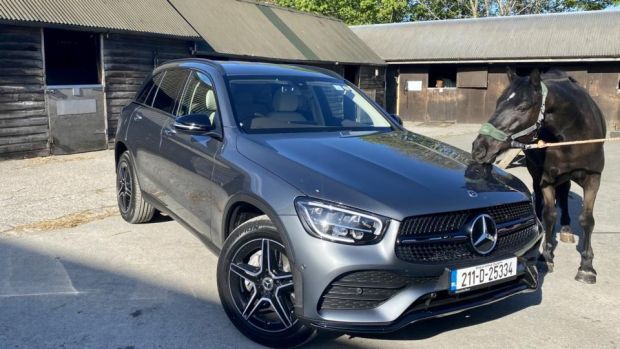 The company that gave us the modern car in 1886 is firmly embracing electric as the next iteration of the horseless carriage. Seemingly with every passing month comes another Mercedes-Benz fitted with a plug socket. Into the alphabet soup of its model range, a lowercase e is appearing on the rump of a lot more Mercs this year.

The latest to arrive on these shores is a plug-in hybrid (PHEV) version of its popular GLC crossover. Not that a plug-in GLC is necessarily new – it has been available on the continent for years – but it’s the first time this version has made it to Ireland.

With the facelifted GLC – and ahead of the reported arrival of a completely new GLC aimed at 2023 sales – Mercedes is actually offering the plug-in family crossover in two flavours: petrol-electric and diesel-electric.

In the total new car market, plug-in hybrids (PHEVs) account for just over 6 per cent of total new car sales. For some brands in the premium sector, however, it’s well into double digits. At BMW PHEVs make up 34 per cent of new sales, while at Volvo it’s running at 56 per cent.

Currently Mercedes-Benz is back at the market average rate of 6.5 per cent, but clearly has ambitions to change this, partly helped by this facelifted GLC.

In a choice between the petrol or diesel versions, the latter would seem to make more sense. For daily commutes, you should be able to manage on a full electric range of 45km or so, while for longer trips the diesel fuel economy makes most sense. So that’s the one we opted to test drive.

Power comes from combining Mercedes’ well-respected 2-litre diesel engine with an electric motor that gets its power from the car’s 13.5 kWh battery pack.

The most striking initial feature of the car is the impressive surge of power, very different from what you expect from a regular GLC and amongst the most responsive for plug-in hybrids we’ve encountered in a while.

Mercedes claims a 0-100km/h time of just 6.2 seconds for this car – fast for a family crossover. All that for an official CO2 emissions rating of just 49g/km and a claimed fuel economy as low as 1.8 L/100km (157mpg).On the outside, the only real discernible difference is on the rear bumper where the charge socket is neatly housed behind a discrete door flap

On the outside, the only real discernible difference is on the rear bumper where the charge socket is neatly housed behind a discrete door flap. If you’ve got a 7kW home wallbox – currently on offer with grant support from SEAI – you can fill the battery in 2½ hours and get up to 45km of all-electric driving.

It means you theoretically can get from Galway city centre to Spiddal, or Celbridge, Co Kildare to the Brown Thomas car park in Dublin – and back again – without reverting to the diesel engine.

On a mix of roads the PHEV system proved itself well-tuned to prioritise electric motoring. Even on motorway stretches the engine never really became part of the driving mix until the battery power charge ran down to low single digits percentage figures.

And when it moves into more regular hybrid mode, the switches between electric and diesel power are relatively seamless.

That was one of the more pleasant surprises delivered by this GLC; the transition between electric and diesel power is impressively smooth - helped by a silky nin-speed automatic transmission, while the cabin remains cossetted in a relative air of silence.

There’s little road noise or even wind noise encroaching inside, even at motorway speeds. The GLC has always impressed with its interior fit and finish: it was further refined with the mid-lifecycle upgrade in 2019, adding in the latest MBUX touchscreen controls.

For the plug-in hybrid variant, there’s little difference, except in the boot, which is slightly raised compared to its regular sibling, housing the battery pack and a smart underfloor stowage area for the recharging cables. that does drop the load capacity, however.

The extra battery weight on the back axle hasn’t reduced the GLC’s driving dynamics and this crossover still handles as well as any rival, though the steering does need to be set in sports mode to get the most responsive feeling. The 4Matic all-wheel drive is also a welcome feature for extra control.

With the battery’s plug-in charge used up, we were recording fuel economy figures in the region of 3.9 l/100km (72.4mpg), which is still pretty impressive.

The internal displays offer plenty of information on range, tips of driving dynamics and adjustments to let you change the driving characteristics depending on your mood or need at the time.

Pitted against that range of competition the plug-in GLC seems to have the edge, based on its offering of a diesel engine and electric power at a competitive price.

Perhaps its greatest rival may come from within its own ranks, with reports that Mercedes is preparing a plug-in hybrid four-wheel-drive version of the GLB, a car that’s sacrifices little to the GLC in terms of space, but hopefully arrives in showrooms with a lower price.

For now, however, the plug-in electric-diesel GLC seems to offer the best bridge to the future for Irish motorists in the market for a premium family crossover and looking for a mix of premium refinement, practical family space and the chance of running regular commutes on full electric power but with the ability to deliver diesel fuel economy for longer trips.