Refurbished five-bed with views over Terenure College lake and fields for €1.9m 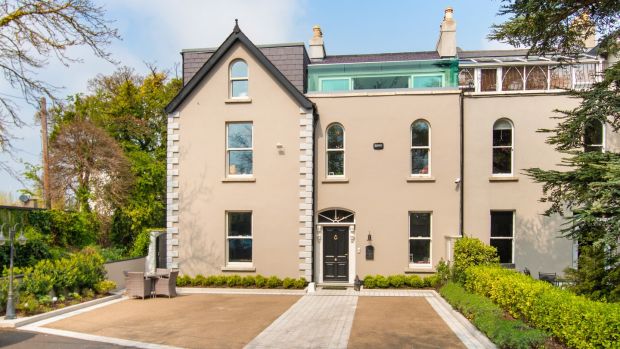 A Victorian house at the end of a cul-de-sac close to the grounds of Terenure College and Terenure Rugby Club has been so thoroughly renovated since its owners bought it five years ago that virtually everything in it – but for a large marble mantelpiece in the drawingroom – is new, although faithful to its original style: new sash windows are triple-glazed, window shutters, stairs, ceiling coving, period-style radiators, even architraves around doors are new.

The house has been also been extended and modernised and has smart new bathrooms and a very large open-plan kitchen/sittingroom opening to the back garden. Designed and decorated with huge attention to detail by the owners, it comes for sale in walk-in condition – no mean feat, considering that the couple have four young daughters. The BER is B1.

Number 30 Lakelands Park, Terenure, Dublin 6W, a 312sq m (3,360sq ft) semi-detached five-bed, is for sale through Sherry FitzGerald for €1.9 million, more than twice the €825,000 it sold for in 2016. The house was built in the 1860s, around the same time the Carmelite order bought Terenure House and lands and opened its secondary school. Lakelands Park is hidden away off the Terenure end of Templeogue Road.

The front door opens into a hall floored with grey-and-white patterned tiles, with white panelling below the dado rail, and pretty silvery grey wallpaper. The­­­­ long drawingroom on the left has a pale oak herringbone parquet floor, the white marble fireplace, three sash windows (one to the front, two at the side) and part-panelled walls.

On the right of the front hall is their daughters’ playroom, filled with neatly shelved toys and books. There is also a downstairs toilet and a smart utility room with a sink and Silestone-topped counter.

The extended kitchen/diningroom/family room looks smart and comfortable: it’s a bright space with two large roof windows that can be opened by remote control, and floor-to-ceiling glass windows and sliding doors opening out to the garden. A large island unit and counters are topped with pale Silestone, the wall behind the kitchen units is exposed brick, and kitchen units are painted a deep blue/grey and have copper handles – and there’s a copper hood over the hob. The kitchen area is floored with white tiles, the dining/family room area with oak.

The new panelled staircase is traditional in style but has smart stairgates built to match at top and bottom to protect the youngest children. Upstairs, there are five bedrooms: three doubles and a single on the first floor and a family bathroom and a large main bedroom suite on the top floor.

An arched window on the first-floor landing at the front of the house looks over the lake on the grounds of Terenure College, as does a glass-walled balcony off the main bedroom on the top floor. Two prettily decorated girls’ bedrooms have a Jack-and-Jill ensuite shower room between them. The family bathroom is fully tiled with pale, subtly-patterned tiles and has a rolltop bath and shower.

The main bedroom, up a short flight of stairs at the top of the house, is a peaceful space: sliding floor-to-ceiling glass doors open onto the glass-walled balcony which looks through tall trees to the lake on the other side of a wall that separates the cul-de-sac from the college grounds. A few steps on the opposite side of the room lead up to a large dressingroom-cum-office: a long counter has a glamorous make-up mirror, there’s a desk at the front next to a window, fitted wardrobes and, at the other side of the room, a large, fully-tiled ensuite.

The relatively small back garden has a patio, astroturf lawn, a good-sized storage shed and room for a children’s play area. There’s side access to the front garden, where there’s space for a few cars in the driveway, which has a resin finish separated by a granite path. A lane beside the next-door house leads to an entrance to the rugby grounds.